We had four contestant groups: The Bells, Bacon Wonderland, Extravabaconza, and Bacon Roses. 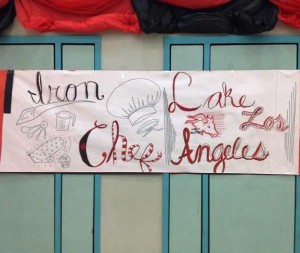 The Bells made a delicious stuffed bell, while Bacon Wonderland made scrumptious pasta with a cupcake.  Extravabaconza made two delightful cupcakes – a maple bacon spice cupcake and a bacon, peach, and jalapeno cupcake. Bacon Roses made a simple piece of bacon wrapped around a rose stem –simple yet original and cute.

The winner was Bacon Roses! All the judges agreed they were not only edible but they were (in a funny way) romantic.

“The hardest part was putting the bacon on the stems,” stated Angie Caiola of the Bacon Roses.

Elly Mora, who came up with the idea and made the roses, said she was surprised that they won. She said she had picked roses because they were a bit easier than other flowers.

”We bought fake roses and we just took off the pedals and the top part,” said Elly’s mom. The Bacon Roses group said they were scared because the chefs had on their poker faces while judging.

The competition featured professional chefs, Executive Chef Stephen Grear and Chef Derrick Biven from the Hilton Garden Inn, as well as General Manager Miriam Arreola. We were so excited when we found out that we were going to have professional chefs as our judges. Many contestants were intimidated by the chefs, so they all stepped up their game.

While Bacon Roses made their victory, Extravabaconza made two delicious cupcakes that got them to second place. The first cupcake was a Maple Bacon Spice Cupcake that consisted of four and a half teaspoons of butter; half a tablespoon of bacon drippings (left in fridge to become solid); one egg; five tablespoons of brown sugar; four tablespoons of maple syrup; one and one fourth cups of self-rising flour; one teaspoon of baking soda; half a teaspoon of baking powder; and a tiny pinch of kosher salt. The second cupcake was a Bacon Peach Jalapeno Mini Cupcake. One chef said, “The mini cupcake had great flavor, although I didn’t taste the peach.”

Bacon Wonderland made two delicious dishes. The first was pasta. The sauce was made of Prego, bacon, and provolone sauce. They also had a cupcake that was made of bacon, flour, cocoa powder, baking powder, salt, eggs, buttermilk, vegetable oil, vanilla extract, unsalted butter, powder sugar, bittersweet chocolate, nutella, and heavy whipping cream. One chef said, “The pasta was cooked perfect, but the cupcake was a little dry.”

The Bells made one heck of a run for Extravabaconza’s money. They made a green stuffed bell pepper. It was stuffed with rice, chicken, cream cheese, shredded cheddar cheese, pepper, and pork.  As one chef explained, “The taste was good, but it could have used more salt.”

This contest was fierce! The only people that were let to do the Iron Chef were G.A.T.E and high achieving. We had to make our own nutritional labels. It took us two months just making the nutritional label, because we had to not only do the math first but we had to tamper with the recipe to make it better.

The teacher who put it all together, Ms. Bolton, worked hard to set this all up and contacted the Hilton Garden Inn near the Antelope Valley Mall  to get their chefs to judge.