PALMDALE – Friday, Sept. 20 was National POW/MIA Recognition Day in United States, a day to pause and remember the sacrifices and service of those who were prisoners of war, those who are missing in action, and their families. 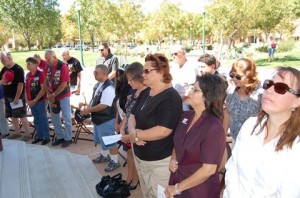 Locally, about 40 residents marked the occasion with a brief ceremony at Poncitlan Square in Palmdale Friday morning.

“We pay tribute to the American men and women who never returned home from combat. We pay tribute to those who faced unthinkable suffering as prisoners of war. And we also remember the sacrifice of families of those who served our great nation,” said featured speaker Daniel Kirmel. “We can never adequately express our gratitude. However, national POW/MIA Recognition Day reminds us to keep their memories alive.” 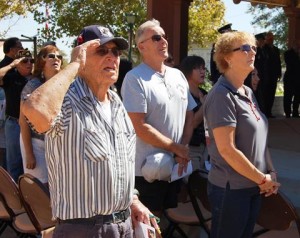 The annual ceremony was hosted by the Antelope Valley Service Organization Association (AVSOA) and the City of Palmdale. It included an invocation by Gary Bassett, a Table of Honor Ceremony by the Highland High School AFJROTC, and remarks from local elected officials.

“We wouldn’t be here without our military… so for me, it’s easy to be here. I just wish I could encourage every American to be here,” Palmdale Mayor Jim Ledford said.

Assemblymember Steve Fox said he was a child of a veteran, making him particularly sympathetic to the cause. 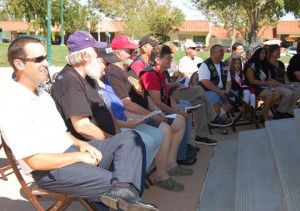 He outlined what the Assembly Veterans Affairs Committee was doing to help veterans.

“At the state level, we are trying to make your lives easier by allowing military job experience to translate to the civilian workforce. We’re taking steps to help [get] military spouses to the front of the line for government jobs. We’re working to treat the physical and emotional wounds of our veterans to get them working again,” Fox said. “One of the greatest sources of frustration for me, as an elected official, is the fact that government cannot act as quickly as it should.” 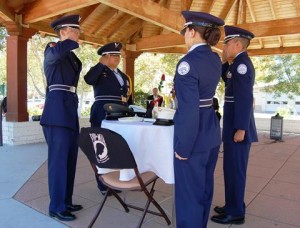 “Every day is a veterans day, every day is a flag day, every day you can show your support for what our young men and women do every day,” Knight said. He said residents can go the extra mile by donating to service members stationed at Edwards Air Force base, who may be thousands of miles away from their homes.

“Whether it be a refrigerator or a bed, they’re always looking for something out there,” Knight said. “Especially on these days, let’s remember what the young men and women are doing, and that they might be called into duty.”

The ceremony closed with a moment of silence in honor of our prisoners of war and missing in action.

The next AVSOA event will be the Veteran’s Day ceremony at 11 a.m., Monday, Nov. 11 at the Palmdale Amphitheater. The event will coincide with the display of the Vietnam Veteran’s Memorial Wall.

View “No One Left Behind” a one-minute video by the Department of Defense explaining the importance of National POW/MIA Recognition Day.