The excitement began around 9:30 a.m. with the opening of a festival area featuring food, merchandise, displays from local organizations, and free Palmdale souvenir magazines for riders to autograph. Enthusiastic cycling fans crowded the bus entrance hoping to catch a glimpse of famous cyclists like the current world road champion Philippe Gilbert of Belgium and Peter Sagan, winner of five stages at the 2012 Amgen Tour of California.

As the cyclists began to arrive and sign in to the Stage 3 Start, a pre-race ceremony kicked off featuring local residents. The ceremony included the posting of colors by the Highland High School ROTC Color Guard, the singing of the National Anthem by Jacob Nelson and Molly Wineland, and welcoming remarks by Palmdale Mayor Jim Ledford.

“To be a part of the largest cycling event in North America gives us international exposure…” said Ledford. “The ridership, support teams and the volunteers that are following the tour are coming into our community, so we’re going to be able to show it off to an international market.”

This is the eighth year of the Amgen Tour of California and the third time it has come to Palmdale.

DOCUMENTING THE RACE FOR ‘BICYCLE JIM’

Lancaster resident Lawrence (Larry) McGetrick, and his guest, Bridget Razo, watched the opening ceremonies from the comforts of an exclusive VIP hospitality lounge.

McGetrick received the privilege as winner of Palmdale’s VIP Amgen Tour of California prize package. The package also included seats for two in an Amgen VIP Race Car traveling the route from Palmdale to Santa Clarita.

McGetrick and Razo were on a mission to document the entire experience for Razo’s husband, Jim Johannesmeyer – AKA Bicycle Jim.

“Jim is a good friend of mine, he’s been an avid cyclist all his life and right now he’s battling leukemia and complications associated with that,” McGetrick said. “He would give anything in the world to be here, so that’s why I brought his wife Bridget, so we could take a lot of pictures and videos and cheer him up by sharing the experience with him.”

“Last year when he was in his first chemo treatment, the Tour de France was on, which made it so much more bearable for him to be able to watch the different stages of the tour and get his mind off the treatment,” Razo said. “I’m so thankful to Larry to allow me to be here in Jim’s honor and I’m going to take as many pictures as I can for him… we’re sending lots of prayers and positive thoughts too, that he can hopefully be here next year in person.”

Just after 11 a.m., hundreds of enthusiastic residents joined cyclists at the starting line.  The official start of the race was handled by Palmdale resident Ben Jefferson, who fired the starting pistol as part of Amgen’s Breakaway from Cancer® initiative (read more here).

With cowbells ringing and cameras flashing, cyclists began the 110-mile journey from Palmdale to Santa Clarita. 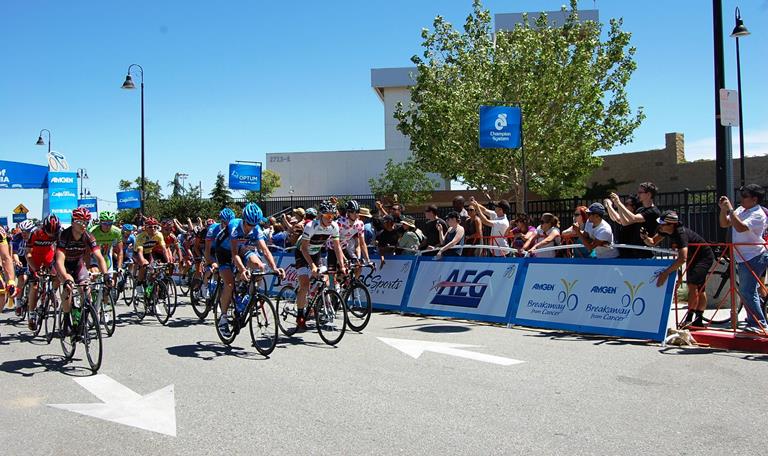 Cannondale Pro Cycling’s Peter Sagan (SVK) blasted to the front of the pack in the final seconds of Stage 3 at the 2013 Amgen Tour of California. View the full story here. For many more pictures from this event, visit our facebook page.