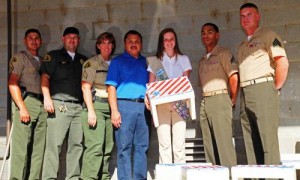 Eighty new red, white, and blue rifle range stools were put to good use recently by the United States Marine Corps. The stools were created through a unique partnership between the girl scouts, sheriffs, marines and inmates.

Ruiz, who is also a gunnery sergeant in the Marine Corps Reserves, went to the Marine Corps Logistics Base in Barstow, California for annual rifle training last year. He noticed that many of the range stools were in disrepair and others needed replacing. He then contacted Sergeant Gerri McCorkle at the Pitchess Detention Center.