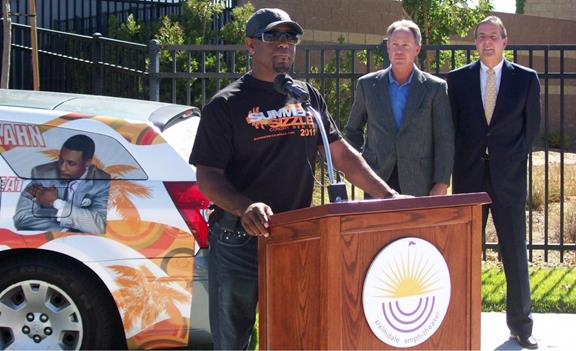 “Everybody needs some entertainment, especially in these times,” said creator/producer Eric Wilson. “People want to have some fun.”

Ten-time Grammy Award Winner Chaka Khan gained fame in the 1970s as the front woman of the funk band Rufus. Her signature hits, both with Rufus and as a solo performer include, “Tell Me Something Good,” “Sweet Thing,” “Ain’t Nobody,” “I’m Every Woman,” “I Feel for You,” and “Through the Fire.”

R&B singer/songwriter, record producer and radio personality Keith Sweat was a major contributor to the New Jack Swing Era of the late ‘80s/early ‘90s, with chart topping hits like “Make it Last Forever,” “I Want Her,” “Nobody,” “Freak Me” and “Twisted.”

Wilson said the lineup was created to produce something for everyone.

“This Summer Sizzle will tap into every portion of every group in the community to make it last forever like Keith Sweat,” Wilson said.

Mayor Jim Ledford encouraged all residents to come out to the event.

“We are looking to the city for support for this,” Ledford said. “This will bring greater sustainability, not only to the Palmdale Amphitheater, but to our city of Palmdale as well.”

Doors open at 4 p.m., Saturday, September 3rd, and show time is at 6 p.m. Tickets are $20 and $30 for festival seating, $60 for reserved seating, and $150 for VIP. Tickets are being sold at Pars Restaurant and the AV Black Chamber of Commerce. Tickets can also be purchased by phone at 866-468-3399 or online at www.summersizzleseries.com and www.ticketweb.com.