Los Angeles County sheriff’s investigators reached out to the public Wednesday in hopes of identifying possible additional victims of a man suspected of targeting more than a dozen victims — including four minors — in a series of sexual assaults, extortion attempts and threats that occurred across Los Angeles County.

The suspect, 21-year-old Michael Watson Jr., was arrested Nov. 8 in Lancaster, sheriff’s officials said at a news conference on Wednesday, Nov. 30 [view it below].

The Sheriff’s Department’s Special Victims Bureau became aware of the incident on Feb. 2 when deputies from the Walnut Station received a 911 call involving two females who were assaulted and robbed on the 15700 block of Colima Road in the unincorporated Walnut area, according to Sgt. Jose Ramos. Watson allegedly befriended the women on Instagram and was invited to their home, where he allegedly raped one of them, stole their cell phones, and demanded their usernames and passwords at gunpoint, Ramos said.

After fleeing the scene, Watson allegedly contacted one of the victims again over social media and issued a series of threats, including extorting money from her by threatening to post nude images online that he had accessed on one of the stolen cell phones, Ramos said.

During the ensuing investigation, DNA evidence linked Watson to similar reported attacks in Los Angeles, Hollywood, East Los Angeles and Inglewood, according to the sheriff’s department. They eventually linked Watson to attacks involving 13 female victims — including four minors. In each case, Watson would allegedly initiate contact with the victims through social media and lure them to various locations where they were assaulted.

“His platform of choice was Instagram and Snapchat…” Ramos said at the news conference. “Once he stole the cell phones of all these victims, he was able to assume their identity, reach out to the victims’ contacts and continue his tirade of sexually assaulting other victims through the use of these cell phones he obtained from every victim he dealt with, so he was very savvy.”

“We utilized our Major Crimes Bureau surveillance team to apprehend the suspect. He was taken into custody November 8 in the area of Lancaster,” Ramos said. “He was booked and is currently in our custody.”

According to the sheriff’s department, Watson was charged by the District Attorney’s Office with 16 felony counts, including aggravated sexual assault of a child under 14, forcible rape, assault with a deadly weapon (firearm), attempted extortion, and grand theft. He remains jailed with bail set at $1,790,000.

Based on the nature of the offenses, detectives believe there may be additional victims. “We are asking the public, if you recognize Mr. Watson as a person that committed a similar crime… we would like to talk to you,” Ramos said.

Anyone with information is encouraged to contact the Los Angeles County Sheriff’s Department Special Victims Bureau at 877-710-5273. Anonymous tips can be made by calling 800-222-8477. 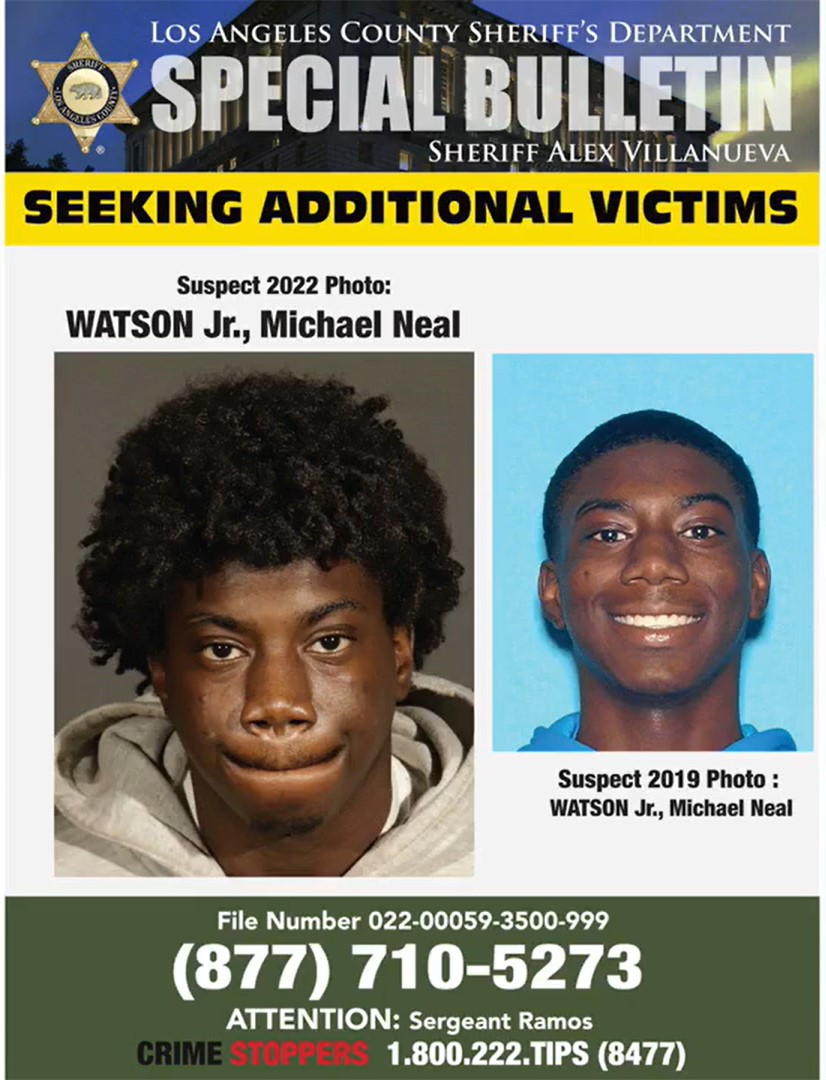