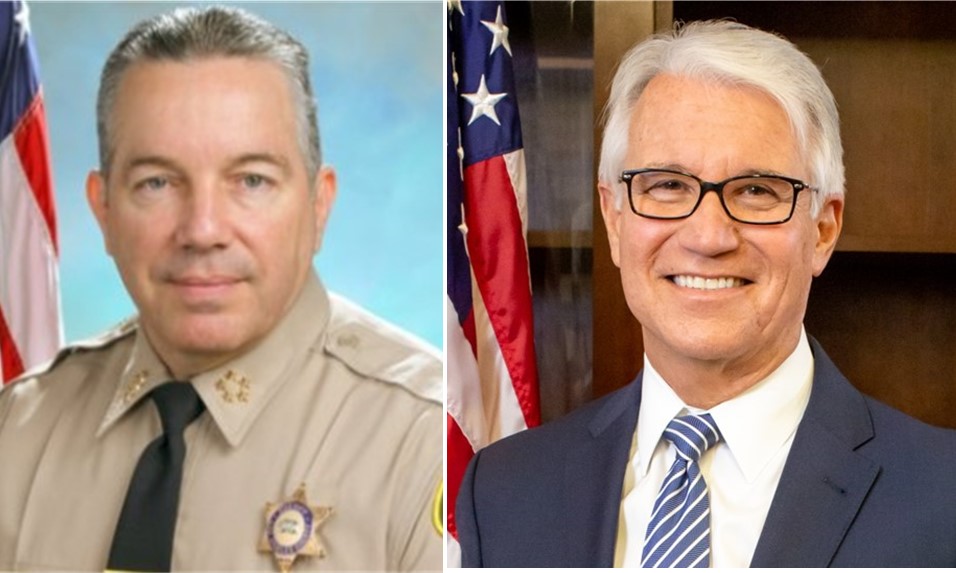 But the District Attorney’s Office issued a statement denying any wrongdoing and saying “many lies” were told during Villanueva’s news conference on Thursday, Nov. 3.

Villanueva told reporters that the District Attorney’s Office Justice System Integrity Division had completed its review of all four cases — all of which made headlines and generated criticism and protests of the sheriff and the department — and determined they involved justified uses of force or did not rise to the level of criminal prosecution of any deputies. Yet the results of the investigations have not been formally released by the District Attorney’s Office, relayed to the sheriff’s department or made public, Villanueva said, deeming it an act of “electioneering” by Gascón, who has been repeatedly criticized by the sheriff.

“Many of these cases were also cited as contributing factors for calls for my resignation and for Measure A being placed on the ballot by the Board of Supervisors and Citizens Oversight Commission,” Villanueva said. Measure A on Nov. 8  ballot would give the board authority to remove an elected sheriff from office under certain circumstances.

Villanueva based his allegations on “disturbing and disappointing information” he said came from “whistleblowers” inside the District Attorney’s Office — acknowledging he has not personally seen any of the reports he claims have been completed. He said the sheriff’s department has not been formally notified of the office’s prosecutorial decisions in any of the four cases, and none of the D.A. reports have been made public, even though Villanueva contends final reports were completed months ago in three of the investigations and last month in the fourth. According to Villanueva, Gascón has already personally signed off on two of the investigations — one of them back in May “during the pendency of his recall effort.”

Gascón was vocal during his campaign for district attorney about being more aggressive in prosecuting law enforcement officers involved in shootings and use-of-force incidents. An effort to recall him over his progressive policies recently fell short of the valid number of petition signatures to put the matter on the ballot. In a statement Thursday afternoon, Tiffiny T. Blacknell, communications director for the District Attorney’s Office, said “there were many lies told” in Villanueva’s news conference.

“A filing decision is not final unless the district attorney has signed off on it,” Blacknell said. “After a final decision is made, out of respect for the family we make every effort to contact them before that information is disseminated to the press.” Blacknell’s statement did not provide any specifics on the status of the four cases referenced by Villanueva in his news conference. One of the four cases cited by Villanueva was the 2020 fatal deputy shooting of Andres Guardado, whose death led to an $8 million settlement with Guardado’s family approved this week by the Board of Supervisors.

The other cases Villanueva claims have been resolved by prosecutors but withheld from the public are the investigations into the 2018 shooting of 16-year-old Anthony Weber in the Westmont area; the 2020 fatal shooting of Dijon Kizzee, also in the Westmont area; and a 2021 use-of-force by a deputy against inmate Enzo Escalante at a San Fernando courthouse that was caught on surveillance video and led to allegations of a cover-up by Villanueva, who has denied any such effort.

The sheriff alleged that Gascón’s office was deliberately withholding investigations that cleared deputies of wrongdoing, likely until after the election. Villanueva, who is facing a tough re-election battle, has been an outspoken critic of Gascón. “The district attorney was literally sitting on the cases, hiding the results of their prosecutorial decisions to advantage themselves politically,” Villanueva said.

He added, “When we do our investigations — good, bad, indifferent — the results we have to present them and do what we’re supposed to do. We take action administratively … we present the case to the district attorney, to the attorney general if it’s a federal case, but we don’t withhold things for material gain or for political advantage. And this is exactly what’s happened in all four cases.

“I’m disappointed, but I’m not shocked, unfortunately,” he said. Villanueva said he has reached out to the Attorney General’s Office, asking it to investigate whether the D.A.’s office was engaging in “electioneering” by withholding the investigative reports from the public.

Blacknell, however, accused Villanueva of using the four cases in an effort to gain a political advantage. “I would also add that the families of those who have been killed or injured by law enforcement deserve better than to have their loved ones’ cases be made into a media stunt on the eve of an election,” Blacknell said.