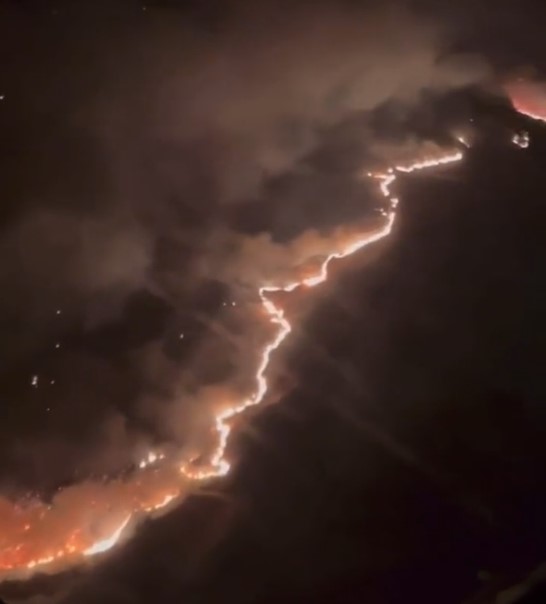 CASTAIC – Firefighters battling the Route Fire in Castaic were reinforcing fire lines Friday, Sept. 2, and focusing on boxing the fire in because of excessively high temperatures in the forecast.

Bolstered by the addition of two Super Scooper water-dropping aircraft, hundreds of firefighters on the ground and in the air continued their assault on the Castaic brush fire, working to extend a containment line around a blaze that has destroyed two structures, threatened 500 more, and led to seven heat-related firefighter injuries.

The Route Fire, which began around noon Wednesday, Aug. 31, alongside the Golden State (5) Freeway north of Lake Hughes Road, was mapped at 5,208 acres as of Thursday morning, according to the Los Angeles County Fire Department. But fire officials reported a successful battle overnight, announcing that crews had contained about 12% of the inferno.

Fire officials announced at 7 a.m. Friday, Sept. 2, that containment had increased to 37%. The burn area remained at 5,208 acres. At a mid-morning briefing Thursday, officials said evacuation orders that were issued Wednesday afternoon for the Paradise Ranch Mobile Home park in Gorman were being lifted. And early Thursday afternoon, the evacuations of homes along Ridge Route Road were also lifted, while Old Ridge Route Road was reopened between Templin Highway and Northlake Hills Elementary School for “residential traffic only,” the sheriff’s department reported. Residents were advised to have their identification ready to show officials.

Seven firefighters suffered heat-related injuries Wednesday while battling the flames in triple-digit heat, but authorities said all seven were released from the hospital and “doing well.” One home along Ridge Route was destroyed overnight, and a separate outbuilding in a different location was damaged, Angeles National Forest Fire Chief Robert Garcia said. There were no reports of any other injuries.

“There was a lot of opportunity with this fire behavior yesterday (Wednesday) for this to go far worse than it did,” Garcia said. “So thanks to our partners for keeping the public and our firefighters safe.

“The headline for us on the Angeles National Forest is going to be the conditions we’re in now,” he told reporters Thursday morning. “The fire behavior and what you saw yesterday should be a wake-up call to us all about the potential that we’re in and we’re entering into over the next few days in terms of the fire conditions. Very rapid fire growth and very, very explosive fire behavior.

“And so the message from the Angeles National Forest … is that the days ahead are going to be very challenging,” he said. “So we ask for full cooperation for our public that’s visiting the national forest and those that live in and around the national forest, that based on those conditions we please ask you to heed the warnings of our conditions, our fire danger level, and our fire restrictions and of course closures and evacuations should a fire emerge in your area.”

On Wednesday, evacuations were ordered north of Northlake Hills Elementary School, south of Templin Highway, east of the Golden State Freeway and west of Castaic Lagoon. The elementary school was evacuated Wednesday, with no injuries to any students or staff. Nearby Castaic High School was unaffected, and that campus remained open Thursday.

Evacuees were advised to head north to escape the fire zone. Frazier Mountain High School in Lebec and West Ranch High School in Santa Clarita were being used as evacuation centers. A Red Cross official said about 40 people took advantage of the centers Wednesday. The Castaic Animal Care Shelter was being open to assist evacuees with animals. Firefighters in helicopters and fixed-wing aircraft worked into the night to take advantage of slightly lower temperatures to begin getting an upper hand against the blaze.

“We were very successful in putting a lot of retardant on parts of the fire where we had some challenges,” Los Angeles County Fire Department Deputy Chief Tom Ewald said. “Ground resources were able to get hose lines and hand crews in to re-establish and strengthen some of the lines that were being threatened earlier in the fire.”

The aerial attack got a major upgrade Thursday morning with the addition of two Super Scooper aircraft, which arrived in the Southland earlier this week from Canada under an annual contract that puts them in service locally during fire season. That contract went into effect Thursday, and the bright yellow Super Scooper aircraft were deployed about 6:30 a.m. Thursday, fire officials said.

“Excessive heat, low humidity and steep terrain will continue to pose the biggest challenge for firefighters today (Thursday),” fire officials said in an incident update statement. “This combination has the potential for large plume growth, uphill runs and short-range spotting.”

Fire officials said they would be working to keep the fire west of Castaic Lake, east of Palumas Canyon, south of Fall Creek and north of Lake Hughes Road. Temperatures in the area were again in the triple-digits, thanks to a heat wave that is expected to continue through the weekend.

Shortly after 1 p.m. Wednesday, the northbound Golden State Freeway was closed at Parker Road, just south of the fire scene, according to the California Highway Patrol. A short time later, flames jumped the northbound freeway lanes and began creeping toward the southbound lanes, prompting a closure of traffic in that direction as well.

On the northbound Golden State Freeway, two left lanes opened Friday morning north of Lake Hughes Road. Southbound, all lanes were open from Templin Highway to Lake Hughes Road. The Castaic Regional Sports Complex was closed Thursday because of the fire. The sports complex could remain closed for the weekend.

Los Angeles County Supervisor Kathryn Barger, who represents the area, hailed the “Herculean” efforts of fire crews braving the heat and difficult terrain to beat back the flames.

“Their labor is also a reminder for us all to practice responsible and safe recreation as the Labor Day holiday approaches,” Barger said in a statement. “Most wildfires are caused by human carelessness. Campfires, discarding lit cigarettes, playing with fireworks — all can trigger a blaze. We all need to do our part to keep our communities safe.”

Fire burning in about 165 acres of brush in Castaic area

The Quick Reaction Force has been working around the clock assisting ground crews on the #RouteFire in L.A County. This joint venture between SCE, Orange County Fire, Los Angeles County Fire and Ventura County Fire has changed the way fires are fought from the air.
🎥 Pilot Chua pic.twitter.com/Y7yFztoqgh