A 21-year-old man, who was arrested in Lancaster last week for allegedly robbing two people in Rowland Heights, was on parole for a carjacking conviction at the time of his arrest, and he is a possible suspect in other similar crimes, authorities said.

Demoryie Watts was arrested Friday, Aug. 12, on suspicion of “robbery, being a felon in possession of a firearm, and a parole violation. He is currently in custody and a second suspect is still outstanding,” according to a news release from the Los Angeles County Sheriff’s Department.

The Rowland Heights armed robbery occurred in broad daylight on July 9 outside a 99 Ranch Market. According to the LASD news release:

An Asian female adult and an Asian male adult were walking to their vehicle in the parking lot when they were confronted by two male Black adult suspects wearing hoodies. The suspects were armed with handguns, and they demanded a watch one of the victims was wearing. Before the victims could react or comply with the suspects’ demands, they were physically assaulted by the suspects, causing both victims to fall to the ground. The suspects then physically removed the watch from the male’s wrist. The suspects fled in a white-colored Dodge Challenger with paper plates that contained distinctive traffic collision damage to the rear passenger fender.”

A bystander captured video of the attack, and investigators were able to identify Demoryie Watts as one of the suspects in the robbery. Watts was taken into custody on Aug. 12 when the sheriff’s department’s Major Crimes Bureau and Special Enforcement Bureau served a search warrant at a residence in the 45000 block of Spearman Avenue, officials said.

Watts remains jailed in lieu of $150,000, according to LASD inmate records. Sheriff’s officials said they’re still searching for a second suspect in the Rowland Heights armed robbery, but no description for the second suspect was released.

“This specific crime was shocking to all because it occurred during broad daylight and at a peaceful family community in Rowland Heights… There is no evidence to indicate the subjects were motivated by hate,” the sheriff’s news release states.

Sheriff Alex Villanueava said he is concerned that District Attorney George Gascón “is not filing cases.”

“Last year, [there were] 13,677 cases where we went to a call, spoke to victims, prepared a report, arrested a suspect, had all the evidence presented to the District Attorney and he refused to file charges because it was a special order, and that blanket policy allowed a lot of people to continue harming the community,” Villanueva said in the news release. 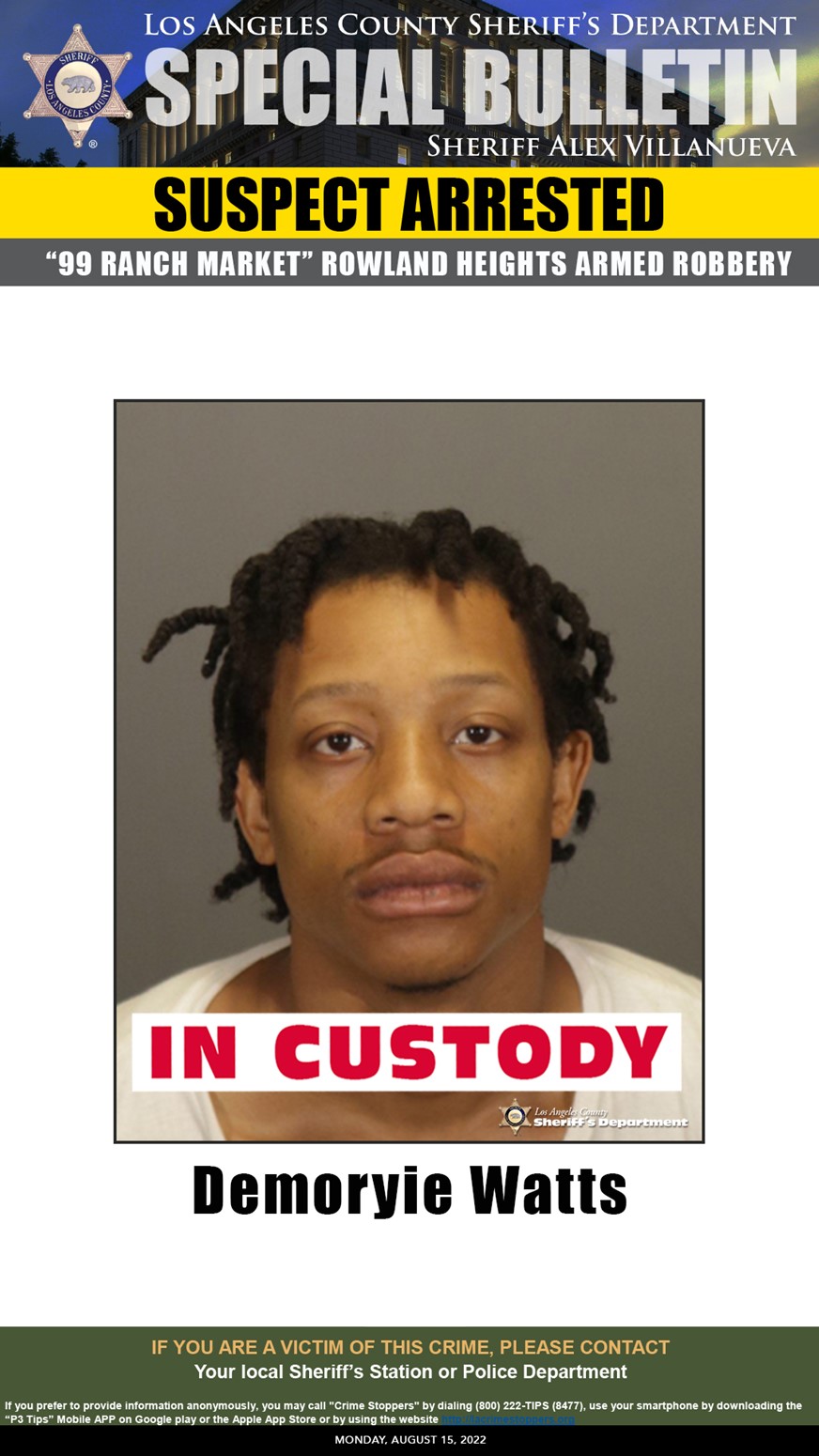