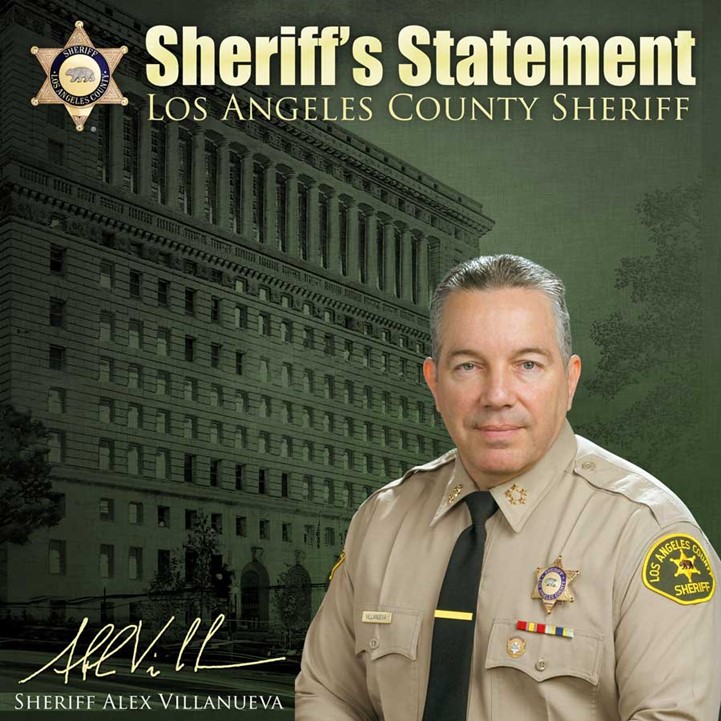 A press conference was aired by Fox 11 alleging that six LASD deputies used excessive force on a compliant inmate who was arrested for a non-violent crime. The use of force in question occurred on July 3, 2022, at approximately 11:50 PM, at the Inmate Reception Center, not Men’s Central Jail.

Upon review, it was immediately recognized as a use of force that solicited a response from our Internal Affairs Bureau (IAB). IAB responded and assumed responsibility of the investigation. The incident was additionally referred to the Internal Criminal Investigation Bureau (ICIB). The case was also presented to the Office of Inspector General.

The attorney representing the involved inmate presented many allegations as fact, which he alluded to was “verified” by a source in LASD, but which are categorically incorrect and misleading. He merely provided a fragment of the facts surrounding the incident, including the inmate was intentionally taken out of camera view and beaten. This is incorrect; in fact the LASD has multiple cameras covering the entire incident.

The video provided by Mr. [Jose] Romero was apparently recorded from the Dvtel system and released without official permission and did not encompass the entire incident. Prior to the contact with the deputies, Mr. [Jesus] Sotojara was involved in an argument with another inmate and had removed his shirt to fight the other inmate. Mr. Romero claimed the contact with Mr. Sotojara was “unprovoked” and he was 100% not involved. This was inaccurate.

Although we cannot comment on on-going investigations, we can confirm that the subject involved in the force was seen by medical professionals, as is standard procedure in all force incidents. In fact, the incident occurred in the IRC clinic which has medical staff immediately available. Then he was given additional medical attention at the TTCF Urgent Care for a higher level of medical care. And when addressing the documentation of his medical care, Mr. Romero stated, “My experience is they don’t when they are in their custody.” This again is categorically false, all injuries and/or force incidents are fully documented, and all medical concerns are addressed and fully documented by Correctional Health Services.

This press conference and video released out of context and without authorization clearly proves why the entire investigation needs to be completed, with appropriate oversight, to ensure all the facts are presented in a responsible manner. Releasing a snippet of an incident with inaccurate allegations claimed to be “vetted” is irresponsible and borderline disingenuous.

LASD followed all the appropriate protocols, with the primary focus on Mr. Sotojara receiving medical attention.

Mr. Sotojara was arrested on July 3, 2022, by Claremont Police Department for the following charges :

About the author: The Los Angeles County Sheriff’s Department (LASD) is the largest sheriff’s department in the United States and the fourth largest local police agency, with approximately 18,000 employees, 9,915 sworn deputies and 9,244 unsworn members.

4 comments for "Op-ed: LASD statement regarding use of force at Inmate Reception Center"