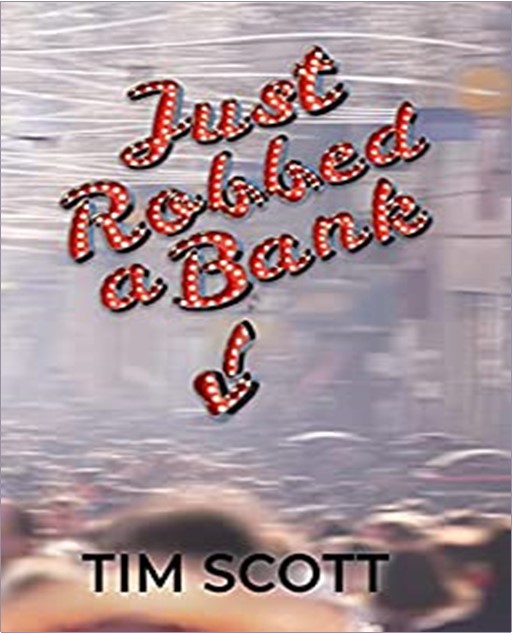 LANCASTER – Frequent readers of TheAVTimes.com may recognize Tim Scott as an outspoken commenter on this news forum. But the 60-year-old Lancaster resident is also a banker robber, turned business owner, turned author.

Today [June 20, 2022] marks the one-year anniversary of the publication of “Just Robbed A Bank,” Scott’s hilarious, but true memoir that details how he went from bank robber to business owner, and beyond.

“Just Robbed a Bank” is a book of stories that recount Scott’s life before, during, and after becoming a bank robber. These stories are for adult readers who enjoy humorous writing that can be analyzed in depth or taken at face value. Although every story in “Just Robbed A Bank” is funny, they also tackle deeper concepts like the revolving door of the U.S. criminal justice system.

According to Scott, the hardest thing to remember when you are a bank robber is that you still look like everybody else. A giant sign that says “Just Robbed A Bank” is not flashing over your head, it is IN your head. That understanding that everyone has their own reality, even if they are all walking down the same sidewalk, has informed Scott’s life and shows in the stories he tells in “Just Robbed A Bank.”

TheAVTimes.com caught up with Scott recently to learn more about his motivation for writing “Just Robbed A Bank” and his ties to the Antelope Valley. Here’s more…

TheAVT: What is your connection to the Antelope Valley?

TS: I was born at Edwards Air Force Base and was brought home to a house in Lancaster that my parents lived in almost until they died.

TheAVT: Give us a little information on your bank robbing backstory.

TS: I was charged with four [bank robberies] and pleaded guilty to three. What seems strange to a lot of people is that I really didn’t keep track of the total, but in the book when you read about the way I was living when I was an active bank robber, it makes sense. I was active in the early/mid 90s and served 44 months through the real middle of the 90s.

TheAVT: What was your motivation for writing “Just Robbed A Bank”?

TS: I met a guy who is a freelance editor. He had to give up a career in journalism because of a chronic medical condition, and to say that he ‘struggles to make ends meet’ is the understatement of the century. I was trying to boost his optimism by suggesting that any time he could catch lightning in a bottle and edit for some first-time writer that turned out to have the next “Ready Player One”… and [I] learned that editors don’t get royalties, which I think is wrong. So, I wrote a book for him to edit and split the royalties with him.

TheAVT: What is the message that readers should come away with after reading “Just Robbed A Bank”?

TS: That you can choose how you want to be, no matter your circumstances. People generally choose to be miserable, even competing in a sort of misery sweepstakes. I make a different choice.

TheAVT: Why should Antelope Valley readers take a look at your book?

TS: If nothing else, it’s just plain funny. Plus, I sold cars before I robbed banks, and that was mostly here. I don’t make any direct references, but long time AV people might recognize some things.

TheAVT: What was the response to your participation in Inkwell: Palmdale’s Book & Art Festival?

TS: [My] book sold well that day, good times were had by all, the [Palmdale City] Library stocked my book.

TheAVT: Do you have any other upcoming events aimed at promoting your book?

TS: I do radio interviews when I can book them, but don’t have any scheduled currently.

TheAVT: What are you up to these days?

Mostly goofing off. I sold my business in Bakersfield about 20 years ago and came here to take care of my folks. I had enough money to retire comfortably in most third world countries and intended to move on once my parents no longer needed me, but as a man’s best plans often end… “then I met this girl.” She’s rooted here, so I am too. I have some property down in Belize and she should be ready to retire in hopefully just a few more years so we’ll see where we end up then.

“Just Robbed a Bank” is available for purchase on Amazon or wherever books are sold.