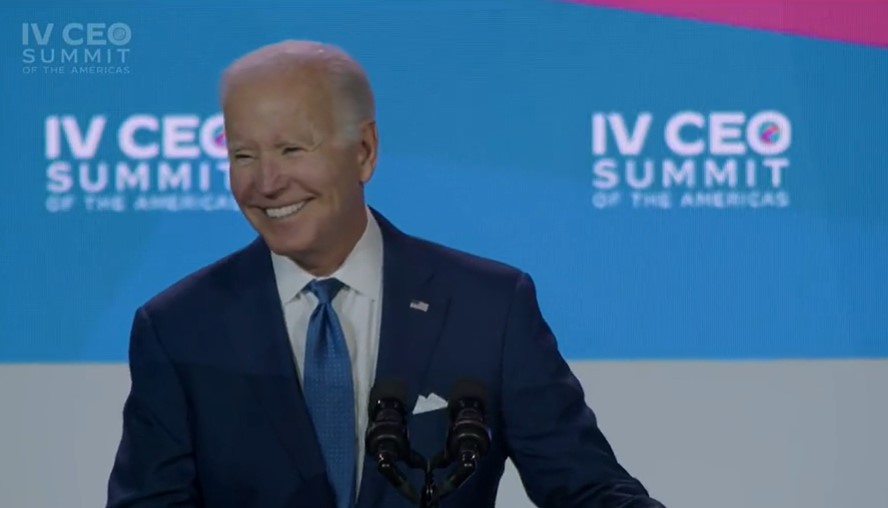 As working sessions began at the Summit of the Americas in Los Angeles County, President Joe Biden Thursday challenged business leaders to join with Western Hemisphere nations to prepare the global economy for the coming decades through investments in supply chains, clean energy and the “digital future.”

Speaking at the CEO Summit of the Americas gathering of business leaders at the Intercontinental Hotel, Biden said the “economy of the future” will depend on decisions made today.

“The economy of the future will increasingly belong to those who place a premium on resilience and reliability, who invest over the long term and strengthen supply chains now to mitigate the impact of future shocks before they hit,” Biden told the gathering, which is sponsored by the U.S. Chamber of Commerce and held in conjunction with the Summit of the Americas convention of Western Hemisphere political leaders.

“Each of us — the government and the private sector — have a critical role to play,” Biden said. “That’s why I’m focused on driving economic policies that grow our economies from the bottom up and the middle out. Because quite frankly, when that works, everybody does well.”

Biden told the business leaders that governments attending the Summit of the Americas will be making commitments to achieve “sustainable and equitable growth” across the region. He said those decisions will include improved supply chains, developing a “shared framework for our digital future,” advancing action against climate change, speeding the transition to clean energy, combating food insecurity and managing “safe and orderly migration.”

“My challenge to all of you is, if you step up and play a bigger role in driving inclusive, sustainable and equitable growth in the 21st Century, a lot is going to happen,” he said. “What more can you do to engage in these issues that shape our future?”

He noted specifically, “If you make the investments necessary to build more secure and resilient supply chains, that’s ultimately going to bring down your costs and make you more competitive and boost your bottom line.”

The speech was the first of several stops for Biden as part of the summit. He was also scheduled to speak at the opening plenary of the summit at the Convention Center, and hold bilateral meetings with Canadian Prime Minister Justin Trudeau and Brazilian President Jair Bolsonaro.

Biden will also join with Vice President Kamala Harris in meeting with leaders of Caribbean nations. The meeting will focus on deepening the U.S.- Caribbean partnership, according to the White House. A new partnership led by Harris to address the climate crisis will be launched.

Biden and Trudeau will discuss how to strengthen cooperation between the two nations on economic development, the pandemic, migration and more, according to the White House. Biden and Bolsonaro will reaffirm the importance of the two nations’ strategic partnership on issues such as combating the climate crisis and recovery from the COVID-19 pandemic, the White House said.

Later, Biden and first lady Jill Biden will welcome heads of state and government and their spouses for a dinner at the Getty Villa Thursday night. Biden, Harris and local leaders formally opened the ninth Summit of the Americas on Wednesday, June 8, calling the gathering an opportunity to build economies across the Western Hemisphere and create a “prosperous and inclusive future.”

“California is a place where ambitions and dreams become reality,” Harris told the crowd. “And so we all gather in Los Angeles this week for the Summit of the Americas with big ambitions — ambitions that began 28 years ago in Miami at the first ever Summit of the Americas, when our nations set the Western Hemisphere on a new path. A path to grow our economies and improve the lives of our people. And together we have made progress on this path, a path that I believe is critically important for so many of us.”

The summit will continue through Friday, June 10, at the Convention Center in downtown Los Angeles.

A senior administration official told reporters this week the summit “is an opportunity for us to come together as a hemisphere to tackle some of the top concerns of the people in the region, including obtaining and sustaining economic prosperity, climate change, the migration crisis and the COVID-19 pandemic.”

Five formal documents will be released during the summit, “reflecting an ambitious hemispheric consensus on everything from support for civil society to promoting digital connectivity,” the official said.

During Wednesday’s opening ceremony, Biden announced the “Americas Partnership for Economic Prosperity,” a five-pronged effort to bolster regional economies by building on free-trade agreements and addressing “inequality and lack of economic opportunity and equity,” according to the administration official.

Among the partnership’s goals are improvements in international supply chains, creation of clean-energy jobs and efforts to ensure “sustainable and inclusive trade.”

Also during the summit, Biden will announce more than $300 million in regional assistance to combat food insecurity, along with health initiatives aimed at preparing for future pandemics and a partnership with the Caribbean community to address climate issues.

On Friday, Biden and other leaders are expected to sign the “Los Angeles Declaration on Migration,” which the administration official described as a pact to pursue a “comprehensive” approach to addressing the crisis.

Mexico is among the nations expected to sign the declaration, despite news this week that Mexican President Andres Manuel Lopez Obrador will not be attending the gathering. He pulled out of the event in response to the Biden administration’s decision declining to invite Cuba, Nicaragua and Venezuela to the conference. Mexico, however, will still be represented at the event.

The exclusion of the three nations has led to questions about the legitimacy of the event overall, and increased the presence of critics. Opponents of the gathering’s tenor are holding a meeting of their own, dubbed the People’s Summit for Democracy, at Los Angeles Trade-Technical College.

Organizers of the event contend the Summit of the Americas “has long been an arena to push U.S. economic and political interests in Latin America and the Caribbean, without regard for the people of our shared continent.”

“When a powerful country imposes what it claims is `democracy’ on other countries, it demeans the idea of democracy and crushes the possibility of any real democracy from taking root,” according to the group’s website.

Various protests were also being held around the actual summit. A group of climate activists dropped a banner from the Seventh Street overpass of the Harbor (110) Freeway to protest what they called the Biden administration’s reliance on fossil fuels, and demanding an end to fossil fuel drilling on federal lands.

The Los Angeles gathering for the Summit of the Americas is the first time a U.S. city has hosted the event since 1994, when the inaugural conference was in Miami. Representatives from the Western Hemisphere began arriving Monday. The summit convenes once every three or four years. During the most recent summit — which was in Peru in 2018 — the region’s leaders committed to fighting corruption, according to the U.S. State Department.