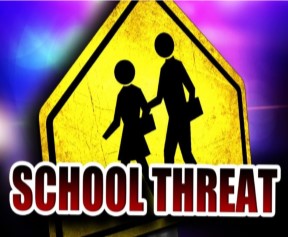 SANTA CLARITA – Canyon High School students have been told to remain at home Thursday, June 2, the last day of school, after graffiti threatening the Canyon Country school in Santa Clarita was found in a campus bathroom stall, school officials said.

According to Canyon High School Principal Shellie Holcombe a student discovered the graffiti on Wednesday, June 1.

“As soon as the graffiti was discovered, our administrators investigated and called in law enforcement to assist,” Holcombe wrote in a message to parents and families on the school’s website. “We are working closely with law enforcement to have an expanded presence on campus and in the neighborhood tomorrow.

“Since tomorrow (Thursday) is the last day of school and it wouldn’t involve significant disruption to student schedules, we are opting to transition tomorrow’s final exams for periods 2 and 7 to an online format. We are hoping that by doing so, we can calm anxious nerves as we head into summer break.

“Your student’s teachers will be reaching out this evening or early tomorrow morning with instructions on how to access the final exam,” Holcombe added. “Students are to remain home tomorrow, and all on-campus athletic and extracurricular activities have also been canceled. Graduation rehearsal and graduation will continue as planned, and a separate email will be sent to the families of Canyon seniors.”

Canyon High officials will be working closely with police to have an “expanded presence on campus and in the neighborhood” on Thursday, according to the school.

A Santa Clarita Sheriff’s Station spokeswoman said school resource deputies were informed by school administrators that a verbal threat had been made and directed at the school by a former student.

Cerna was booked into the Santa Clarita Valley Sheriff’s Station and was being held in lieu of $100,000 bail. The investigation into the threat remains under investigation.

2 comments for "Canyon High cancels classes after threat is discovered"