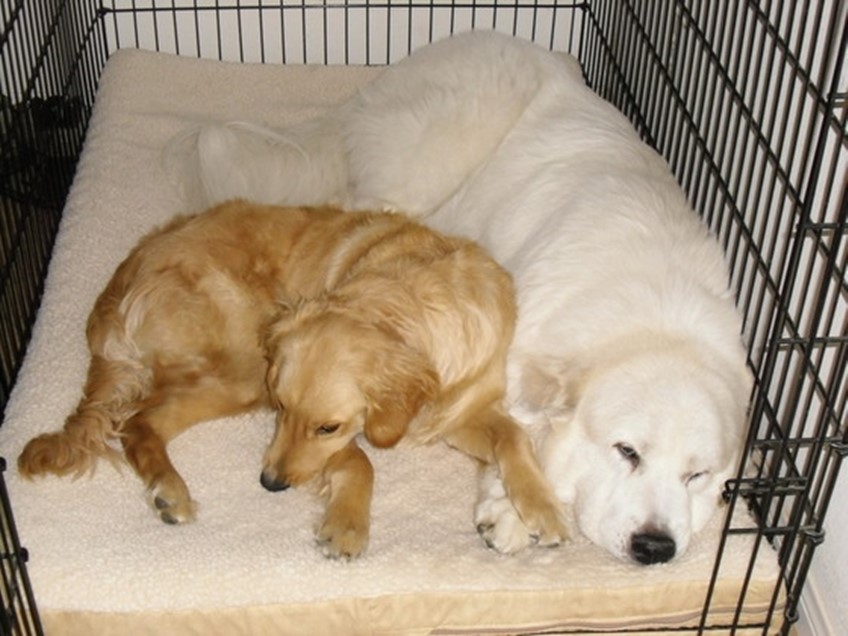 The other night my husband and I were talking about one of our past dogs, a Great Pyrenees named Isabella, who passed away several years ago at 14 years of age. When we mentioned her name, our Golden Retriever, Rebecca, raised her head and looked around the room. She clearly recognized Isabella’s name and remembered her.

Now eleven years old, Rebecca came to us as a rambunctious five-month-old puppy after she had been surrendered by her owners at our Lancaster Animal Care Center. She and Isabella lived together for many years. Isabella taught Rebecca doggie manners, provided calm leadership, and allowed Rebecca to take naps with her. Rebecca recognized Isabella as her leader and took her cues from her. This relationship had an impact on Rebecca, and she remembered Isabella even after she had been gone for many years.

Was she grieving? I don’t think so, at least not at this point. However, in the weeks after Isabella’s passing Rebecca did seem a little lost. Always an affectionate dog, she reached out even more for attention (and perhaps consolation). Her world had changed, and she was adapting to Isabella’s absence.

I was reminded of this when I read the results of a recent study regarding dog grief as a result of the loss of another dog in the home. This 2022 study was the result of a survey of 426 Italian dog owners who had owned at least two dogs, one of whom died while the other was still alive. The study sought to determine if dogs grieve and reported some interesting findings. They found:

The dogs’ gender, spay/neuter status, age at the time of the other dog’s death, breed, or whether they were able to view the body of their deceased dog friend did not affect the duration of behavior changes.

Other takeaways from this study include:

• The duration of the relationship between the two dogs positively correlated with “playing less”, “level of activity reduced”, and “sleeping more” but no correlation was found with variables such as “fearfulness increased”, “vocalization increased”, “attention seeking increased” and “duration of the behavioral alteration”.

• A friendly and parental relationship between the two dogs was associated with stronger behavioral changes, while no association was found between behavioral variables and an agonistic/mutual tolerance relationship.

• The single significant predictor for playing less was the friendly relationship between the two dogs.

• The level of fear in the surviving dog was positively correlated with its owner’s level of suffering, anger, and psychological trauma.

What can we take away from this information? Be especially mindful of your surviving dog’s emotional status. Provide reassurances and keep a routine to provide a sense of stability. Understand that your grief can also impact the surviving dog, causing anxiety and stress for it. And when you and your remaining dog are ready, consider adding another to your home so your dog can have a new friend. What better place to find that dog than at a Los Angeles County animal care center?

You can read the full study here: https://rdcu.be/cIyQU.

About the author: Marcia Mayeda has been the Director of Animal Care and Control for the County of Los Angeles since July 2001. Subscribe to her blog at: https://animalcare.lacounty.gov/directors_blog/