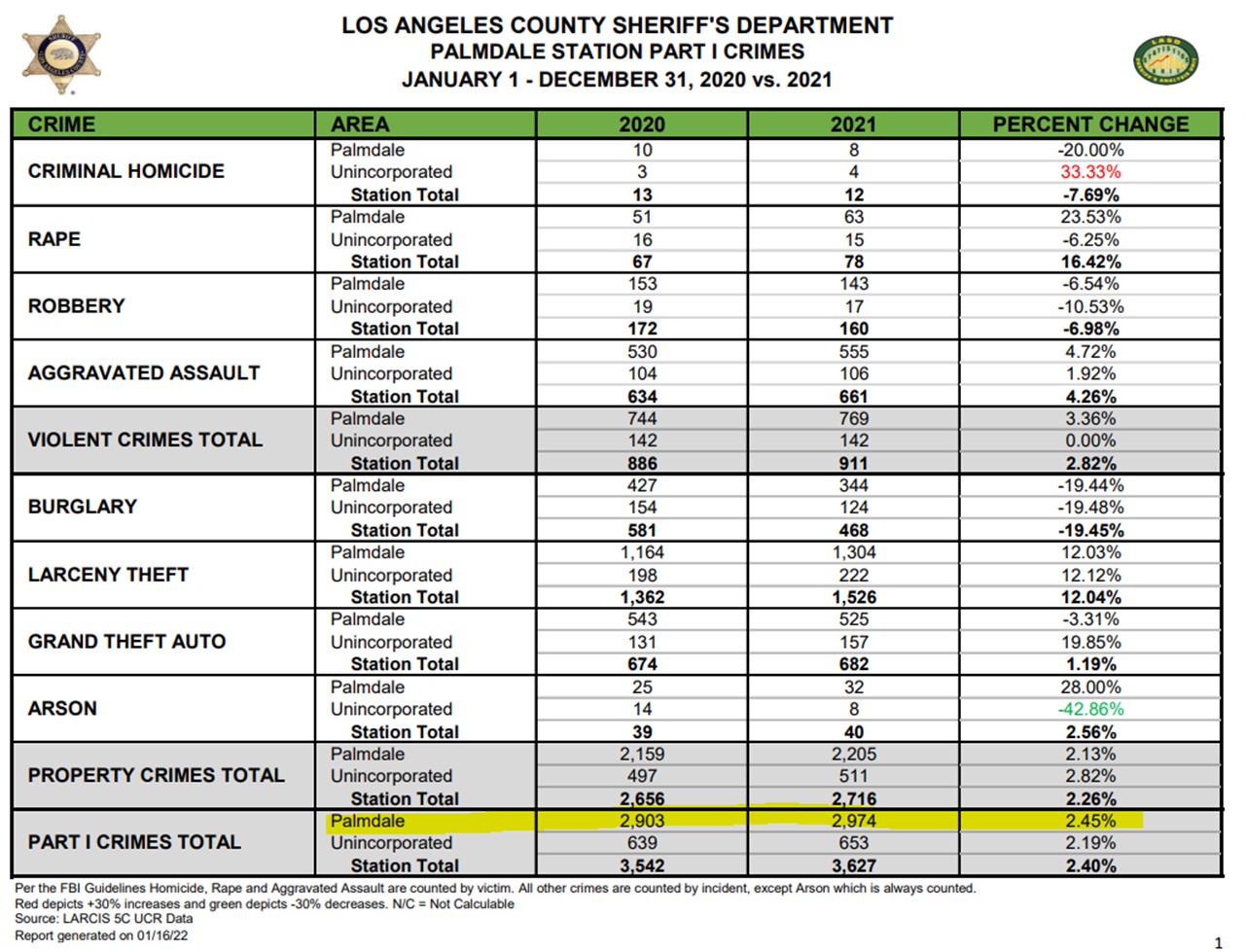 PALMDALE – The City of Palmdale and Los Angeles County Sheriff’s Department (LASD) Palmdale Station have announced a crime rate of 175 crimes per 10,000 population for the year.

“These are the lowest numbers that we have seen since we have been tracking,” said Mayor Steve Hofbauer. “Once again, the partnerships we’ve developed with City staff, law enforcement, and our residents continue to make our community safer for everyone.”

“Our Palmdale Station personnel are committed to public safety despite enduring challenges these past couple of years,” said Palmdale Sheriff’s Station Captain Ron Shaffer. “The city of Palmdale is an amazing partner in the public safety mission, and the members of our community that work and live in Palmdale have been the best resource in improving our efforts.”

“Public safety is a top priority of our City Council and these statistics further prove that their vision for a safer Palmdale is on track,” said Acting City Manager Ronda Perez. “The Council is committed to public safety and the results are playing out in the community.”

“We are looking to continue our crime reduction efforts this year,” Captain Shafer said. “Continued success will require help from the community.”

Editor’s Note/ UPDATE: A previous version of this story incorrectly stated that Part 1 crimes in Palmdale decreased in 2021. The article has been revised, and Palmdale Communications Manager John Mlynar issued the following correction on Feb. 28, 2022:

The city of Palmdale recently issued a press release on its crime stats for 2021 and announced a crime rate of 175 per 10,000 residents. That is the lowest crime rate in over a quarter century.

However, we mistakenly noted in the press release that the percentage of Part 1 crimes decreased, when they in fact increased. The actual number of Part 1 crimes for 2021 was 2,974, which was 71 more than 2020’s total of 2,903, an increase of 2.45%. Yet the crime rate dropped. How could that happen?

We apologize for the error and any confusion it may have caused. The City of Palmdale remains committed to our community-oriented policing approach of engaging law enforcement, City staff, and our residents to work together for the common goal of making our City as safe as possible.”