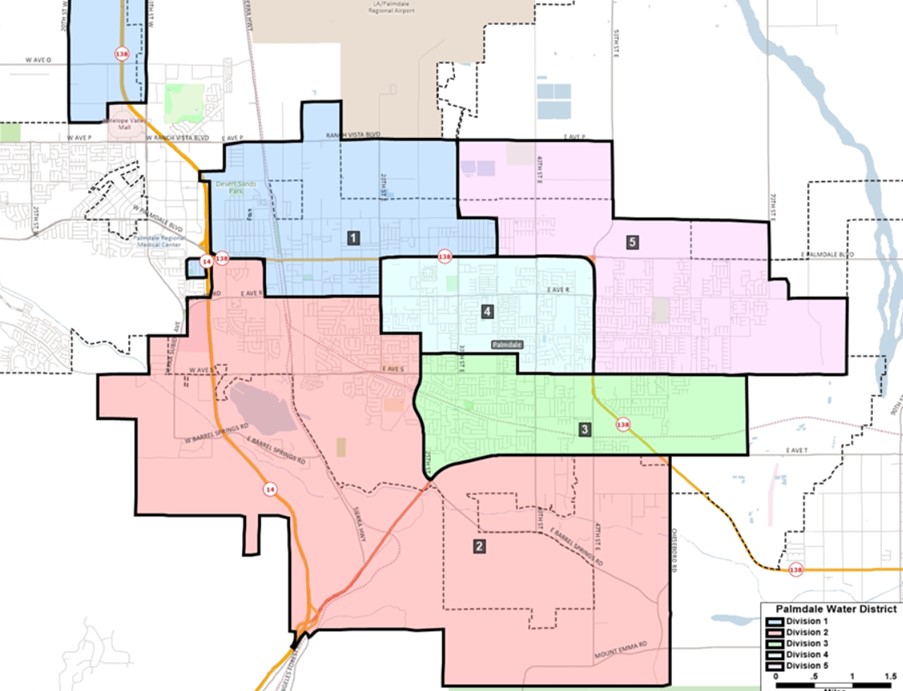 Palmdale Water District will hold a public workshop this week to receive community input and provide information about the process it is undergoing to set the boundary lines for the five divisions in its service area.

The virtual workshop will be held from 5 to 6 p.m. on Thursday, Jan. 27, via Microsoft Teams. Residents can participate virtually by visiting https://bit.ly/3KxbtT5.

Every 10 years following the U.S. Census, redistricting is required to ensure each PWD Board member represents about the same number of
constituents. The process determines which neighborhoods and communities are grouped together into a division for the purpose of electing a Board member. PWD is using the results of the 2020 census, which was released in August 2021.

“We are seeking the public’s input as the division map is formalized for our Board members,” said PWD Assistant General Manager Adam Ly. “The process happens every decade, but, oftentimes, there is little to no change due to the lack of population shifts. This is what we are seeing in our divisions.”

According to the District’s redistricting consultant, Andrew Westall, principal and owner of Bear Demographics & Research, the total population within PWD’s service boundaries is 126,994 people. That equals to 25,399 people per division. By law, there should be no more
than a 10 percent deviation in the number of people amongst the five divisions. Since the numbers show PWD’s divisions are within the 10% deviation and the population has not shifted drastically since the 2010 U.S. Census, each Board member’s current division boundary may remain unchanged if that’s the directors’ preferences.

PWD will hold two more virtual redistricting public hearings, on Feb. 14 and March 28. Both hearings will start at 6 p.m. For more information about the redistricting process, www.palmdalewater.org.