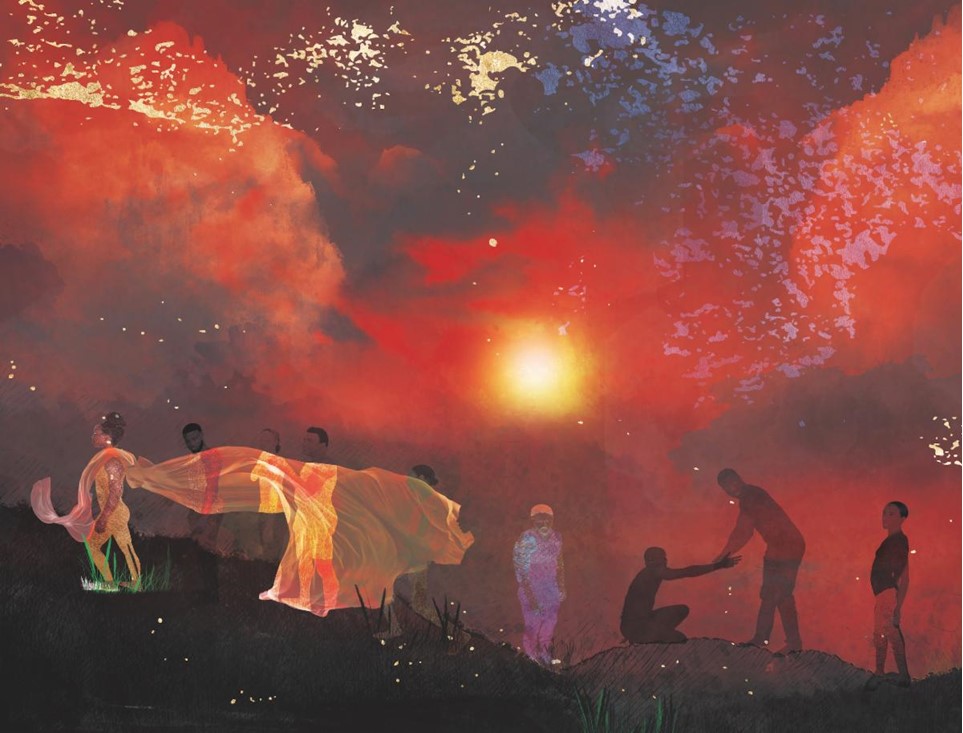 The Lancaster Museum of Art and History is opening its latest exhibition season, Activation, a series of solo exhibitions from artists Mark Steven Greenfield, April Bey, Paul Stephen Benjamin, Carla Jay Harris, and Keith Collins. Activation revolves around the experiences of marginalized communities in America and the pursuit of social change using art as activism. The opening reception for Activation will be held from 4 to 6 p.m. Saturday, Jan. 22, in tandem with What Would You Say? Activist Graphics from the Los Angeles County Museum of Art, the second exhibition in its Local Access series. The exhibitions will remain on view until April 17.

Mark Steven Greenfield: A Survey, 2001-2021 chronicles 20 years of work by Greenfield. The exhibition features artworks from series such as Animalicious, Vague Memories of Cotton, and, more recently, the Black Madonna and Hey-Lo series. Greenfield’s work subverts the racist imagery of cartoons, advertising, minstrelsy, layering historical, and contemporary context. Utilizing African American stereotypes, spiritual practices, social justice, and the power of the subconscious. He unearths topics of race and examines them at their roots, using visual cues from past eras to investigate the injustices that are happening today. Greenfield believes that by facing the toxic imagery buried in American history, people of every race and ethnicity can heal and move forward in a way that benefits society on a large scale.

Paul Stephen Benjamin’s work serves as an introduction to a broader and multifaceted conversation about race and identity. Oh Say is a video and sound installation that presents a compilation of various African American artists and their performances of “The Star-Spangled Banner.” Featured artists include Jimi Hendrix, Stevie Wonder, and Beyoncé, with performances that range from music festivals to sporting events. The performers are arranged in conjunction with imagery of the American flag and the faces of five presidents on adjacent sections. The work blends both past and present histories, bringing these timelines into the context of today. Oh Say examines the complexities of racial identity in America, allowing Benjamin’s depiction of blackness to present itself retrospectively.

April Bey provides reflective and social critique of American and Bahamian cultures in her exhibition, The Opulent Blerd. Her artworks are often weaponized with concepts of Afrofuturism, a genre of speculative fiction regarding the future and significance of peoples and cultures within the African Diaspora. Pop culture, racial construct, and feminism are some of the many topics that Bey discusses. Research, material, and processes are crucial contributors to Bey’s work; she often travels on a national and international scale, allowing her to gather experience, material, and cultural information directly from the source.

Carla Jay Harris uses imaginative storytelling as a tool to understand, undo, and build anew. In her most recent body of work, A Season in the Wilderness, Harris presents a new story — one that is inspired by the range of emotions felt during the current pandemic and social turmoil. A Season in the Wilderness explores themes of loss, grief, survival, power, and rebirth, with each artwork telling its own story while contributing to the narrative of the series as a whole.

Keith Collins is an American visual artist who specializes in large-scale tapestries, performance and luxury automotive floor mats, oil paintings, and industrial assemblage sculptures. His tapestry work is created using carpet remnants which are arranged and assembled to create a collage that has been “jigsaw-puzzled” together. Rendered in Collins’ signature mosaic-carpet style, Muhammad Ali, falls within his series of celebrity portraiture. The imagery on the tapestry, based on a photograph taken by photographer Neil Leifer, proves not to be just a portrait of a boxing icon, but an homage to an important figure in the history of American Civil Rights.

The public is invited to participate in several programs, including the Spanish-language and sensory-friendly programming supported by Art Bridges providing an inclusive experience for patrons of the museum. The museum provides sensory-friendly hours from 9 a.m. to 10 a.m. every first Saturday of the month during an exhibition season for those experiencing autism or hyper/hypo-sensitivities. A Young Artist Workshop will accompany the exhibitions and occurs every first Thursday of the month.

MOAH remains in compliance with state and county-mandated COVID-19 prevention measures. Commonly-touched surfaces, such as doorknobs, handrails, and elevator buttons, are routinely disinfected by MOAH staff members; and the ventilation systems are well-maintained. Guests are asked to properly use face coverings or other Personal Protective Equipment (PPE) and maintain a six-foot social distance while inside the museum.

MOAH is open Tuesday – Friday, from 11 a.m. to 6 p.m., with extended hours on Thursdays until 8 p.m. For more information, visit www.lancastermoah.org.