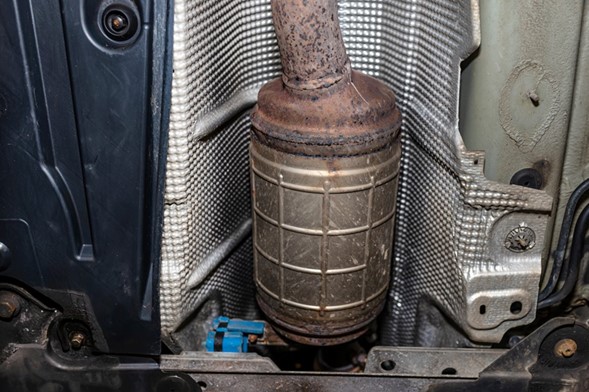 Los Angeles County District Attorney George Gascón Monday called on auto manufacturers to work with him to develop solutions to address the rise in thefts of catalytic converters across the county and throughout the nation.

“Catalytic converters are quick and easy to steal, and thieves can quickly turn them into cash,” Gascón said in a statement. “In addition, the lack of unique identifiers makes it virtually impossible to prove in court that a particular catalytic converter was stolen.”

Catalytic converters — which are used to turn hazardous exhaust from a vehicle into less harmful gases — are made of highly valuable metals such as platinum, rhodium and palladium and can fetch up to $1,200 each, according to the District Attorney’s Office.

California is among the top five states for catalytic converter thefts, and there has been a sharp rise in the thefts nationwide since the COVID-19 pandemic began, according to the National Insurance Crime Bureau.

Gascón urged auto manufacturers to join him in an effort to “develop creative and inexpensive solutions to substantially prevent these crimes from occurring and reduce the likelihood of victimization in Los Angeles County and the rest of the nation.”

The district attorney has reached out to four major automobile manufacturers, with only the Torrance-based Honda Motor Co. Ltd. expressing interest so far in exploring possible solutions, according to the District Attorney’s Office.

While the top prosecutor in San Francisco, Gascón led a similar effort to reduce thefts of cell phones and sponsored legislation making California the first state to require kill switches on cell phones that make the devices inoperable if they are stolen.