The Los Angeles County Board of Supervisors Wednesday renewed a $10,000 reward for information on the whereabouts of a man suspected in a fatal shooting in Lancaster last December.

An additional $10,000 — for a total reward of $20,000 — is on offer from the city of Lancaster for information leading to the arrest and conviction of Oscar Palazuelos.

Palazuelos is wanted in the killing of Ismael Zabala, 26, who was gunned down on Dec. 20, 2020, while attending a family birthday party at a relative’s home, according to the Los Angeles County Sheriff’s Department. Investigators identified Palazuelos and Ervin Alvarez as suspects in the killing, and Alvarez was subsequently arrested. Palazuelos remains at large, and sheriff’s investigators believe he has gone into hiding, according to Supervisor Kathryn Barger, who recommended renewing the reward.

The Sheriff’s Homicide Bureau held a press conference in July to ask for the public’s help in tracking down the suspect. They said then that Palazuelos was 19 years old. According to sheriff’s Lt. Derrick Alfred, Palazuelos and the second suspect were invited to the gathering in the 400 block of West Avenue J-12 by another attendee, but were not known to Zabala or his family.

“They were invited inside (but) after some time both men were asked to leave,” Alfred said. “A physical altercation occurred at the front door, where Ismael Zabala and an additional victim were then assaulted by both men. Oscar Palazuelos and the second suspect drew handguns. Oscar Palazuelos fired. Ismael and another individual were struck by gunfire.”

Zabala died, but the other victim, identified by Barger as Zabala’s brother Charlie, survived. Zabala had served three years in the United States Army before receiving an honorable discharge.

“What we’re looking for is just some kind of justice,” his father Alex Zabala said at the news conference, where he appealed for public help in finding Palazuelos.

“I would appreciate it if everybody that’s out there, if they know his whereabouts, can help us out and bring him in, so he can pay for his crimes …” Alex Zabala said. “And the sooner we can get him in, the better. He’s out there, and what he did is not right.”

Palazuelos is described as 5-feet-9 inches tall and 180 pounds, with black hair and brown eyes. He should be considered armed and dangerous, according to the sheriff’s department. The reward, which was set to expire Sept. 19, will be available for at least the next 90 days. 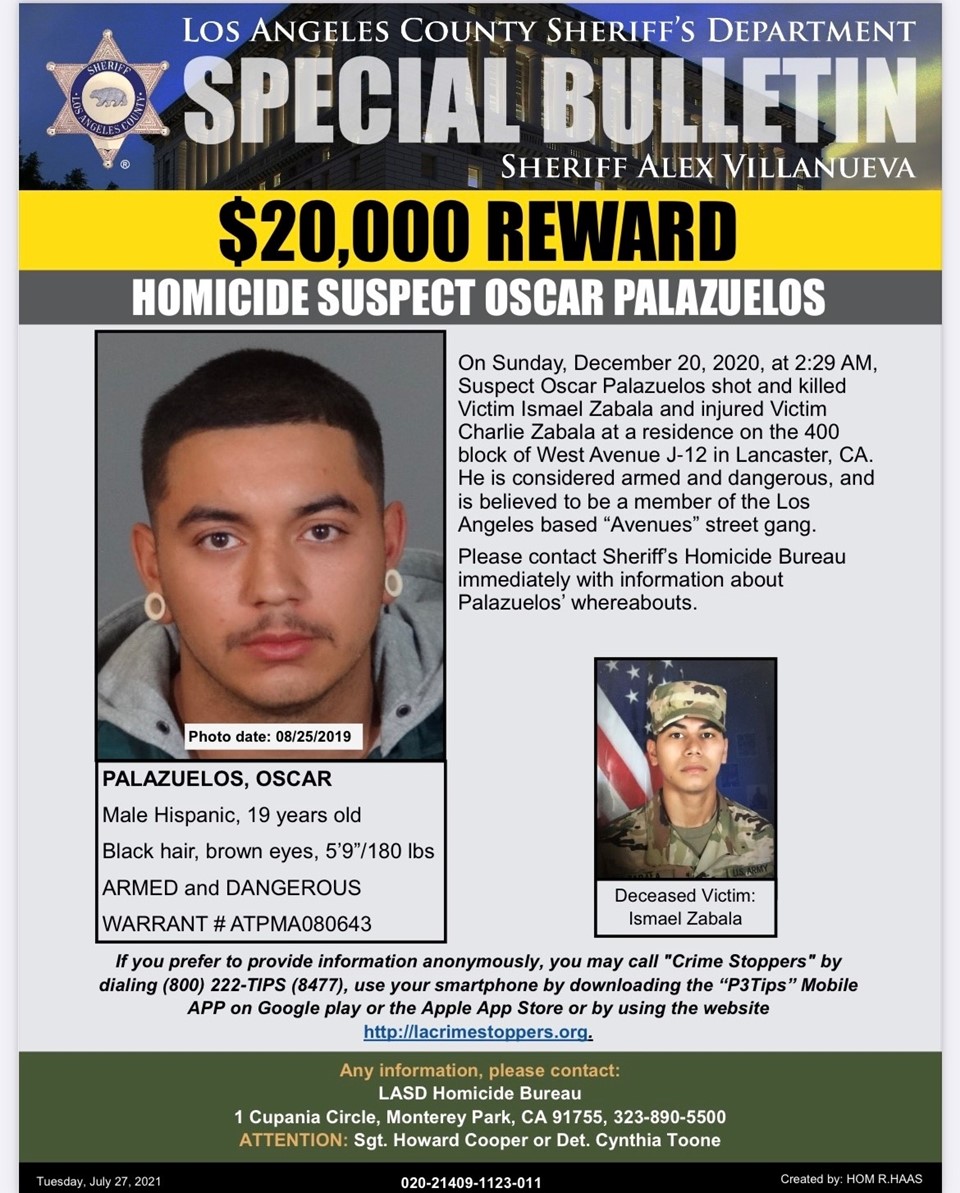 Reward doubled to $20K in murder of Army veteran in Lancaster