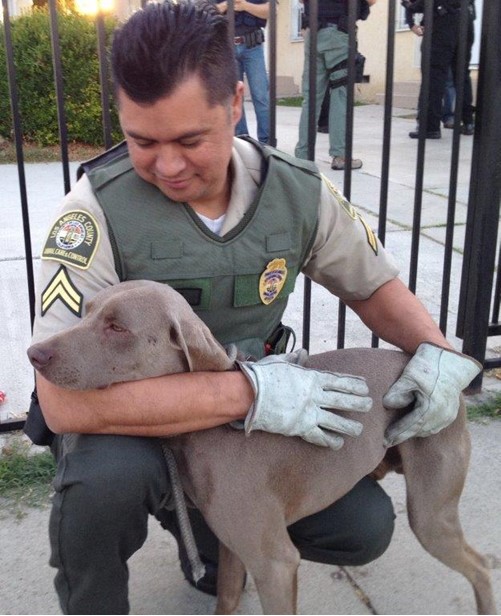 
I am still haunted by a case I had in 1986 when I was a newly minted animal cruelty investigator in Houston, Texas. I had received a complaint from a resident about her neighbor, who had dozens of animals inside her home that were ill and often dying. Offspring born to the dogs and cats would die shortly after birth and the owner would wrap them in tin foil and place the little bodies under her home, which was raised on cement blocks. Rats were feeding on the bodies and the entire property was a hazard.

When I arrived at the pet owner’s home, I was completely shocked at what I saw. The elderly owner cracked her front door open and I could see she was dressed in a filthy housedress and had open sores on her arms and legs. The barks and yowls from animals inside the darkened house told me there were many animals inside. There was an overwhelming stench of feces and urine that made my eyes burn and I had to hold my breath as much as I could.

I told the woman the reason for my visit and that I needed to see the animals to check on their condition. She denied having multiple animals despite the strong odor and loud animal noise behind her. She finally relented to let me see one animal and brought it to me.

It was a small animal, about 15 pounds. There was not one hair on its body, and the skin was thickened, wrinkled, and oozed serum – the clear yellowish liquid that separates when blood is clotted, as in a blister. The animal was so disfigured that I couldn’t even tell if it was a dog or cat until she placed it on the ground and, by its movement, I could tell it was a dog. I told her this animal needed immediate medical attention and I followed her to the veterinary hospital. The young veterinarian on duty was shocked at what he saw and called the practice owner for a consultation. They determined the animal was too decimated to survive, and it was mercifully euthanized to end its pain and suffering.

This was my first experience with an animal hoarding case. Animal hoarding is characterized by keeping excessive numbers of animals in filthy and inhumane conditions, failing to provide proper food or medical care, and a lack of awareness of the negative effects these conditions place on the person’s own health and the health of family members. It is a recognized psychological illness that is associated with obsessive-compulsive disorder.

The next day I spoke with the woman’s adult daughter, who lived several hours away. I explained the serious condition of the animals, her mother, and her living conditions. Based on our conversation, her daughter acted. The animals were removed by animal control, the mother went to live with her daughter, and the house was so damaged it was demolished.

This case is an example of how animal welfare professionals protect people and animals in the community. By informing the daughter of her mother’s condition, I was able to get assistance for the mother as well as see the animals removed from a dangerous and inhumane environment. Today’s blog is the second in a series in which I review how DACC has improved its operations over the past 20 years. This edition discusses how DACC has enhanced its role in protecting our community.

When I joined DACC in 2001 I learned that the Department only minimally responded to complaints of animal abuse or neglect and relied on an outdated County ordinance that did not provide adequate enforcement to protect animals. The robust body of State anti-cruelty laws was rarely used, missing opportunities to resolve serious cases and relieve animals of their suffering. Complaints of potentially dangerous or vicious dogs and noise complaints were subject to cumbersome processes that did not adequately resolve the issues. Dogs that threatened people but had not yet bitten were disregarded, leaving the potential for a future attack. Officers were not trained on investigatory techniques or preparing cases for presentation to the District Attorney. Few, if any, actions were taken to help pet owners in dire need of assistance, like my hoarding example above. Emergency responses to wildfires were disjointed and lacked the proper equipment to rescue and transport animals in danger. The animal licensing program, which includes rabies vaccination verification to protect public health, was harsh and punitive.

The past twenty years have seen a tremendous improvement in how DACC protects the community. Our officers are now trained in how to recognize and report the neglect and abuse of children, elders, and dependent adults. Many times neighbors won’t get involved in such cases when the only victim is a person, but they will call animal control when animals are in jeopardy. When we respond and discover people in need of assistance, we immediately notify law enforcement or the appropriate social services agency to respond. These agencies likewise now report animal abuse to us, triggering our officers to rescue animals in danger. We also provide confidential, free pet boarding for pet owners who are victims of domestic violence. In many cases they do not leave their abuser because domestic violence shelters do not allow pets, and they fear the abuser will harm or kill their animals in revenge if they leave. Our boarding program ensures the pets are safe and well cared for until the victim can safely reclaim them.

One of the most important roles DACC plays is protecting the public and animals from dangerous dogs. Our Safe Neighborhoods program protects residents who are threatened by dogs that have not yet bitten, such as aggressive dogs in a poorly fenced yard that may be able to escape and attack. Through this program, officers proactively meet with the dog owner, verify compliance with rabies vaccination, license, spay/neuter, and microchip requirements, and counsel the dog owner about responsible pet ownership. Their property is evaluated for weaknesses in confinement, and orders are issued to correct deficiencies. No more waiting for a bite to occur — by taking these measures we prevent bites from happening in the first place.

When bites or attacks occur the Critical Case Processing Unit (CCP), established in 2012, thoroughly investigates and takes action regarding potentially dangerous and vicious dogs. The CCP unit reviews more than 1,300 complaints each year and takes administrative or legal action to impose restrictions on the keeping of dangerous dogs or remove them from the home.

Animals are now much better protected against animal abuse and neglect. While many cases can be resolved with education and lower level enforcement, others rise to misdemeanor or felony crimes and are referred to our designated Major Case Unit officers. These experienced officers investigate the more serious cases and refer them to the District Attorney’s office for prosecution. These cases include intentional cruelty, criminal neglect, animal hoarding, dogfighting, and cockfighting. In 2017, DACC was the lead animal agency in the largest cockfighting raid in U.S. history, with more than 7,800 birds involved.

DACC has also significantly expanded its ability to rescue and shelter animals during major disasters. Southern California wildfires often mean emergency evacuation orders and DACC responds quickly with well-trained teams to rescue and shelter pets and livestock. We have added a fleet of newer horse and livestock trailers, a mobile emergency command center, and a large movable inflatable tent with cooling and heating to provide a safe environment for pet owners and their animals. A new mobile medical response unit is fully equipped to provide on-site surgical and other veterinary treatments for injured animals. Our small animal evacuation trailers are heated and air conditioned and have independent power sources. They are placed at Red Cross shelters during emergencies, so pets have a safe place to be housed while their owners are receiving human shelter and services.

Last year we added a horse evacuation site to our Castaic animal care center where up to 50 horses can be safely housed during emergencies. This compliments our other designated evacuation sites throughout the County, which Santa Clarita area residents may have difficulty reaching if freeways are closed due to the fires. We have Mutual Assistance Agreements with more than two dozen animal care agencies to assist each other during emergencies. In partnership with LA County Fire, specially trained DACC officers respond to rescue horses that have suffered serious accidents in remote, rugged areas and must be evacuated by helicopter. Our trained cadre of volunteer Equine Response Team members provide valuable assistance in emergency evacuation and housing of displaced horses and livestock.

Los Angeles County Code Title 10 – Animals is the County’s ordinance regarding animals. Title 10 has been updated regularly and is a model municipal ordinance for other jurisdictions to use in updating their own ordinances. Updates to Title 10 during the past 20 years include implementing an animal facility letter grading system like the system used to grade restaurants so pet owners have a better awareness of a facility’s compliance with the law. Other revisions include requiring that all dogs and cats be spayed or neutered and microchipped; a very strong commercial animal breeding ordinance for facilities known as puppy mills; improvements to better identify and manage potentially dangerous and vicious dogs; the use of administrative citations and hearings to expedite enforcement actions; a vastly improved animal noise ordinance; and a strong ordinance regarding the keeping of roosters. The ordinance was also overhauled using the County’s Plain Language program, reducing the length of the ordinance by more than 30 percent, eliminating confusing legal jargon, and making legal requirements clearer for residents. This ordinance overhaul earned DACC an award for the application of the County’s Plain Language Initiative from the Los Angeles County Quality and Productivity Commission.

Our animal licensing program has changed its approach to be a collaborative program that works with pet owners to come into compliance with rabies vaccination and licensing laws. The harsh penalties of the past have ended, and owners are given the opportunity to correct their violations with lower penalties and with the opportunity for “fix-it” tickets. This increases compliance and is less punitive to lower income pet parents.

Protecting public and animal welfare and safety is a rewarding mission that DACC is proud to undertake. Developing and implementing new public safety programs and improving laws have made Los Angeles County safer for animals and people. The DACC team takes great pride and is vigilant in its role of protecting the community.

But protecting the community isn’t all we do to assist our residents. In my next installment in this series, I will share how DACC also engages with the community to provide resource to assist pet parents, and how we have revolutionized our animal adoption and customer service programs.

About the author: Marcia Mayeda has been the Director of Animal Care and Control for the County of Los Angeles since July 2001. Click here to follow her “Director’s Blog.”

8 comments for "Op-ed: The past 20 years have seen improvements in how DACC protects the community"