Authorities announced $20,000 in rewards Tuesday for information leading to the arrest and conviction of a man named as a suspect in the murder of Ismael Zabala, a 26-year-old Army veteran who was shot to death at his cousin’s birthday party in Lancaster last year.

Oscar Palazuelos, 19, is wanted in the killing of Zabala, who was gunned down in front of his family members on Dec. 20, 2020, while standing at the front door of a residence on the 400 block of West Avenue J-12, according to the Los Angeles County Sheriff’s Department.

Authorities joined Zabala’s family members for a news conference Tuesday morning, where they displayed a reward bulletin with a photo of Palazuelos and discussed the circumstances surrounding the fatal shooting.

According to sheriff’s Lt. Derrick Alfred, Palazuelos and a second suspect were invited to the birthday party by another attendee, but were not known to Zabala or his family.

“They were invited inside (but) after some time both men were asked to leave,” Alfred said. “A physical altercation occurred at the front door, where Ismael Zabala and an additional victim were then assaulted by both men. Oscar Palazuelos and the second suspect drew handguns. Oscar Palazuelos fired. Ismael and another individual were struck by gunfire.”

Alfred continued: “The second suspect has been identified and arrested… A warrant has been issued for the arrest of Oscar Palazuelos, and we believe he has gone into hiding.”

Palazuelos is believed to be a member of the Los Angeles based street gang “Avenues,” and he is considered armed and dangerous. Authorities believe Palazuelos may be in and out of the Antelope Valley area.

Zabala had served three years in the United States Army before receiving an honorable discharge, according to his family members.

“What we’re looking for is just some kind of justice,” his father Alex Zabala said. “I would appreciate it if everybody that’s out there, if they know his [Palazuelos] whereabouts, can help us out and bring him in, so he can pay for his crimes… The sooner we can get him in, the better. He’s out there, and what he did is not right.”

A $10,000 reward was approved by the Los Angeles County Board of Supervisors last month, and now a $10,000 reward has been offered by the city of Lancaster — bringing the total reward to $20,000 for information leading to the arrest and conviction of Palazuelos.

Palazuelos is described as 5-feet-9 inches tall and 180 pounds, with black hair and brown eyes. Anyone with information on this case is urged to call the Sheriff’s Homicide Bureau at 323-890-5500. 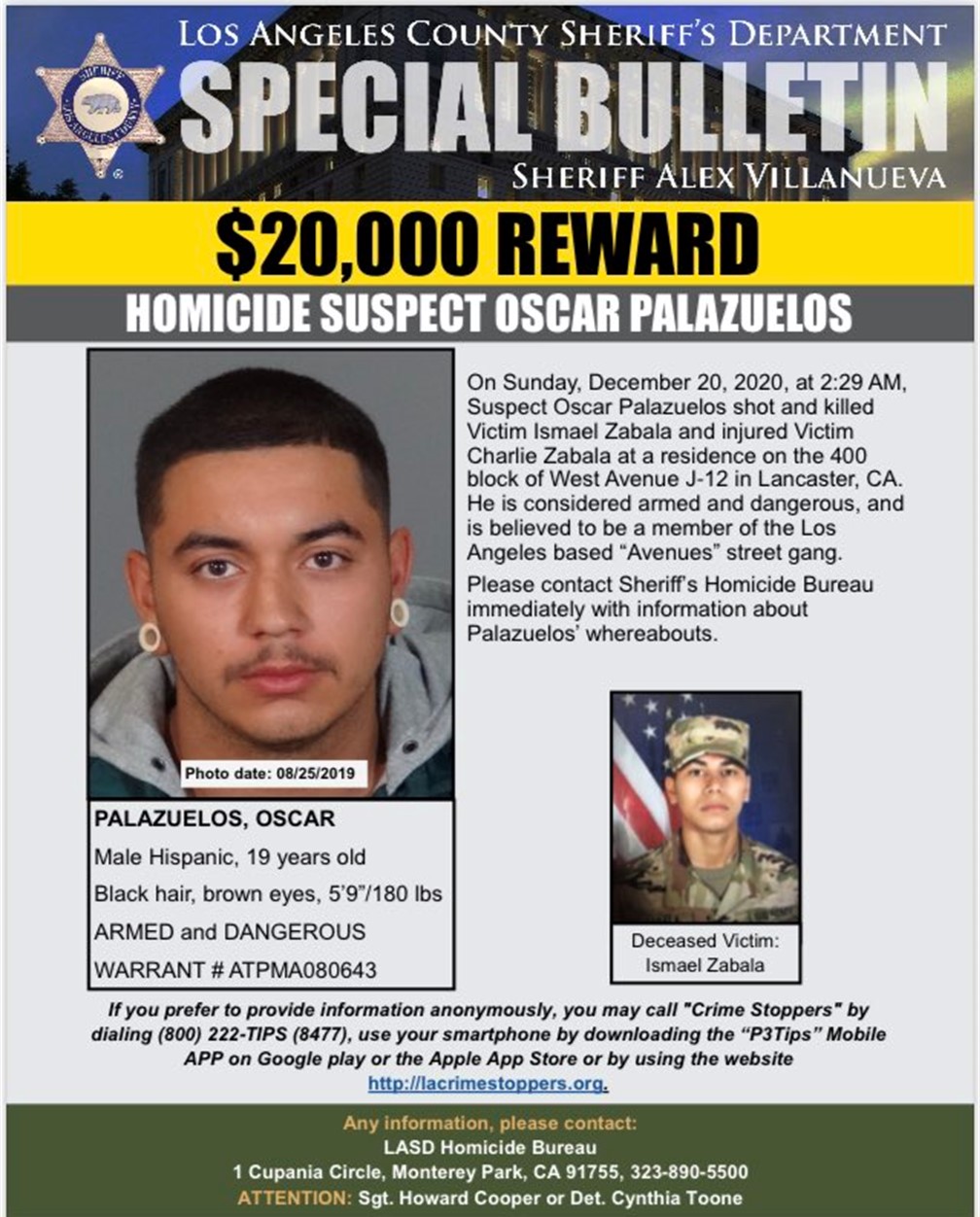