PALMDALE – The city of Palmdale is reminding residents that hefty fines will be issued to individuals caught using illegal fireworks within Palmdale city limits. The details of those fines were shared during a press conference held this morning in partnership with the Los Angeles County Fire and Sheriff’s Departments and L.A. County Supervisor Kathryn Barger’s office.

“Illegal fireworks are not allowed anywhere in Palmdale or in the Los Angeles County portion of the Antelope Valley,” said Palmdale Mayor Steve Hofbauer during the press conference held at City Hall.

“If your firework explodes or shoots up into the air, it’s illegal,” said Los Angeles County Fire Department Acting Assistant Fire Chief Tom Stukey. “They are dangerous and present a real threat to life and property.”

“The city has launched our ‘If you light it, we’ll write it’ campaign, and we need your help to catch these offenders,” said Public Safety Supervisor Kery German. “If you are caught using illegal fireworks in Palmdale, you will be facing a $2,500 fine for a first offense. The fines grow from there to $5,000 for a second offense and $10,000 for a third offense. We are asking our community to report the use of illegal fireworks with as much detail as possible. When we receive information on a specific address we are placing door hangers as a warning that we are aware and watching.”

“We stand here with the city of Palmdale and the LA County Fire Department reminding people that they could even be charged with a felony for using illegal fireworks,” said Los Angeles County Sheriff Department Captain Ron Shaffer. “The use of illegal fireworks at a specific address or location may be reported by calling the Palmdale Sheriff’s Station at 272-2400.”

As of June 21, nearly 500 lb. of illegal fireworks have been confiscated. A total of one criminal citation and 16 administrative citations with fines have been issued already this year.

The city of Palmdale is the only municipality in the Antelope Valley in which “Safe and Sane” fireworks may be legally sold and discharged on private property. However, the housing community Anaverde, all areas south of the California Aqueduct, and locations in the Rancho Vista area are “no fireworks zones” since they are in high-risk fire areas.

“Please remember that no fireworks of any kind are allowed in any of the unincorporated areas of LA County,” said Chuck Bostwick, representing County Supervisor Kathryn Barger’s office, “Even those county pockets that are within Palmdale City limits.”

“I want to invite everyone to enjoy the Fireworks Extravaganza that the City of Palmdale and the City of Lancaster have come together to present at the AV Fairgrounds on the Fourth of July,” Hofbauer said. “It really is the safest way to celebrate.”

The number of booths allowed is calculated at one booth per every 3,000 residents. Based upon current population estimates, a maximum of 52 booths would be allowed to be established in the year 2021, of which 32 have been filled by qualifying organizations.

Organization booths must pass an inspection by the Los Angeles County Fire Department before the Public Safety Division will issue the fireworks permit. Fireworks may be purchased by those who are age 18 and above in the City of Palmdale. Proof of age may be requested for purchase. Thirty-two non-profit organizations were approved for a fireworks booth. 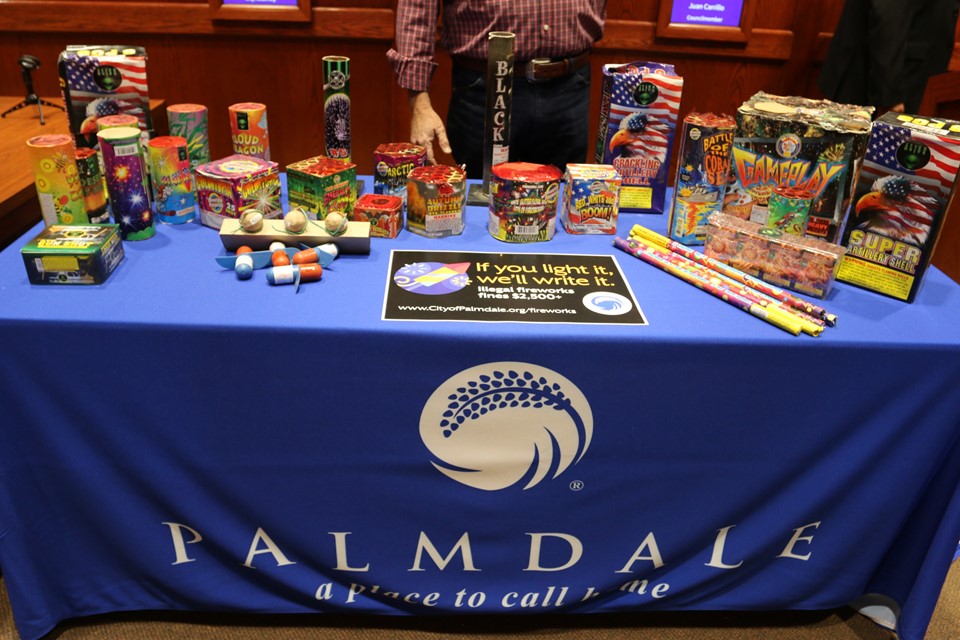