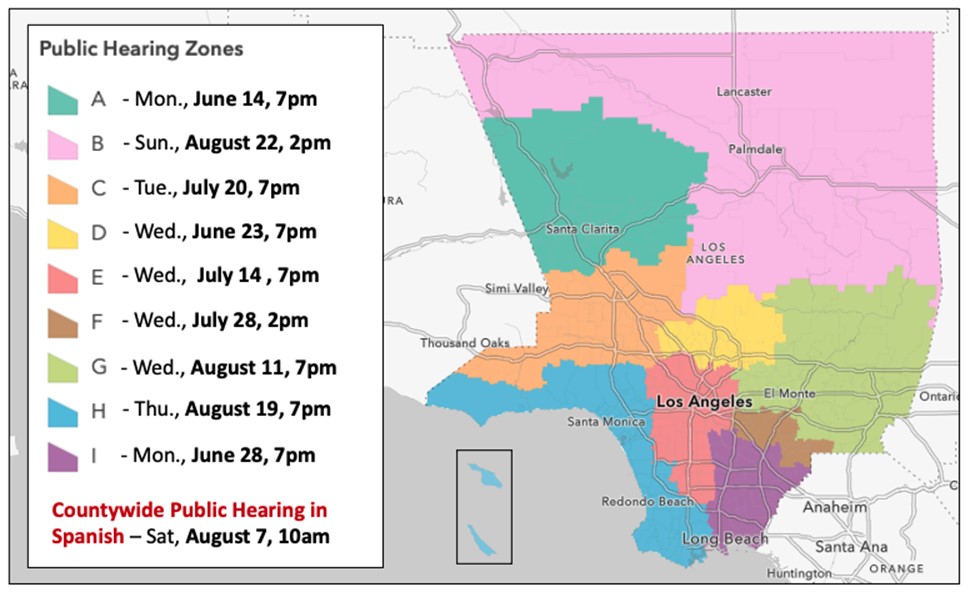 The Los Angeles County Citizens Redistricting Commission Friday announced the dates of 10 public hearings as commissioners decide how to adjust district boundaries for the Board of Supervisors using data from the 2020 census.

The commission is charged with adjusting the county’s supervisorial districts to create areas roughly equal in population and geography. A similar statewide commission, formed every 10 years following the census, is responsible for drawing district lines for Assembly, state Senate and congressional seats.

The hearings will take place at:

Each meeting corresponds to a zone of Los Angeles, but residents of any zone can attend any of the meetings. A countywide public hearing will be held in Spanish on Aug. 7 at 10 a.m.

The commission consists of 14 people who were finalized on Dec. 29, 2020. The registrar-recorder/county clerk received 741 applications and narrowed the applicants to a pool of the 60 most qualified names. The auditor- controller conducted a random drawing at the Board of Supervisors’ meeting on Nov. 24, selecting one commissioner from each of the five existing supervisorial districts and three commissioners randomly drawn from the remaining 55 applicants.

More information about the hearings is available at redistricting.lacounty.gov/public-hearings/.