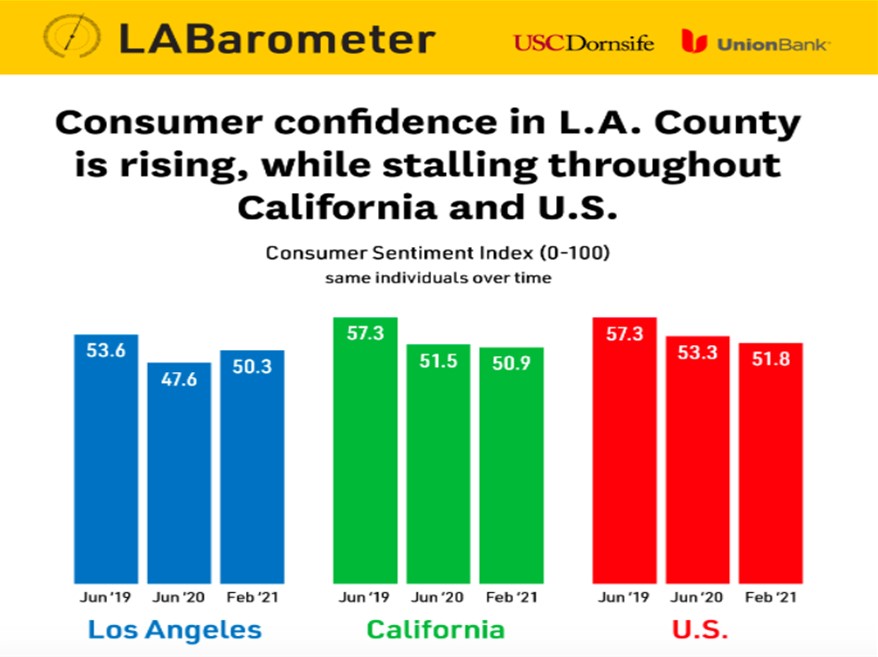 Los Angeles County residents are less satisfied with their quality of life compared to people throughout California and the U.S., but perceive less crime, vandalism, and drug and alcohol use in their neighborhoods than two years ago, according to the second annual USC Dornsife-Union Bank LABarometer livability survey, released Wednesday.

According to the study, on a scale of one to seven, where one denotes low life satisfaction and seven denotes high life satisfaction, the average life satisfaction in L.A. County is 4.3, nearly unchanged from 2019. But it’s almost half a point lower than the U.S. and California average of 4.7 — double the gap observed in 2019.

Residents perceive there to be less crime, vandalism, and drug and alcohol use in their neighborhoods than they did in 2019. Survey respondents were asked a series of questions about whether or not problems like drug and alcohol use, vandalism and crime were common in their neighborhoods. Residents who perceived those to be issues in 2019 were significantly less likely to consider them to be common issues in the most recent survey.

“Five months after our first LABarometer livability survey, everyone’s lives were upended by COVID-19,” said Kyla Thomas, director of LABarometer, USC Dornsife Center for Economic and Social Research. “Our latest findings, which reflect the experiences of L.A. County residents during the peak of the pandemic, reveal reasons for optimism as well as concern.”

Thomas said it was encouraging that “perceptions of neighborhood crime are down and that consumer confidence in Los Angeles County is rising, even as confidence has stalled in other parts of the state and nation. The 40% increase in the number of people who plan to leave Los Angeles County in the coming year, however, raises a red flag. It’s also worrisome that the gap in life satisfaction between L.A. County and the national average has grown.”