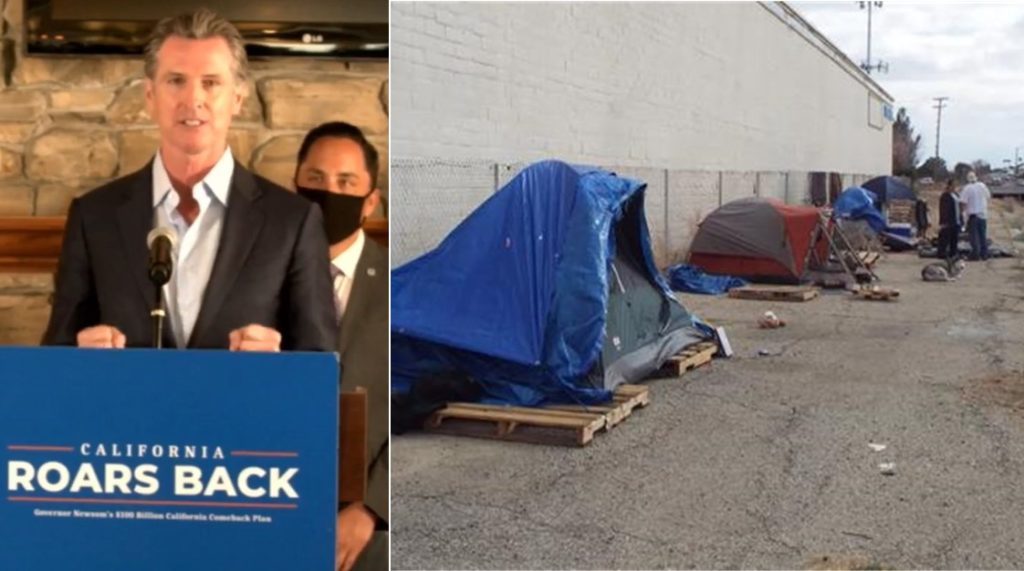 “Within a year, Homekey did more to address the homelessness and affordable housing crisis than anything that’s been done in decades and became a national model,” Newsom said. “Now is the time to double down on these successful efforts.”

The plan focuses on those with the most acute needs, with at least 28,000 new beds and housing placements for clients with behavioral health needs and seniors at the highest risk of homelessness. It also comes with “greater accountability and transparency measures,” Newsom said, to make sure investments are put toward effective solutions and money is well spent.

Newsom said the state will seek to functionally end family homelessness within five years through $1.85 billion in new housing for homeless families and $1.6 billion in rental support and homelessness prevention for families.

The plan was assailed, however, by a pair of Republicans challenging the governor in an upcoming recall.

“Homelessness has skyrocketed by 10,000 people since Gavin Newsom took office,” former San Diego Mayor Kevin Faulconer said. “No amount of money will solve this crisis without a leader who has the political will to buck the status quo and take bold actions to get people off the streets and indoors to receive the help they need.”

Faulconer touted his own record in San Diego, saying homelessness declined during his tenure, and said he could do the same for the state.

“Gavin Newsom has had almost 20 years to address homelessness in California, first as mayor of San Francisco, then as lieutenant governor and as governor,” Cox said. “All we’ve seen is homelessness go higher and higher over the course of Gavin Newsom’s 20-year political career. Now, facing a recall, he says his newest plan will take five years. We can’t afford to wait that long.”

Newsom on Monday announced a proposal to send $600 stimulus checks to Californians earning under $75,000 annually and another $500 for families. He said it would impact around two-thirds of all Californians.

He is also proposing an additional $1.5 billion investment to clean public spaces near highways and transform public spaces through arts and cultural projects. Newsom said the initiative is expected to create an estimated 15,000 jobs, including for people experiencing or exiting homelessness, at-risk youth, veterans and formerly incarcerated individuals.