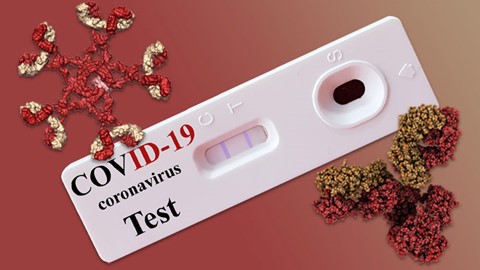 Rapid COVID-19 tests used twice a week could detect the most contagious children and help to make school re-openings safer, according to a study released Wednesday by USC.

“Serial testing is critical because one-time antigen tests might not identify asymptomatic children at or shortly after the onset of infection,” said Neeraj Sood, who directs the COVID Initiative at the USC Schaeffer Center for Health Policy and Economics. “But serial testing will likely identify these children as they subsequently develop high viral loads and become infectious a few days later.”

The rapid tests — which require inserting a swab about a half-inch up the nose and give results in 15 minutes — could be administered by school staff or be self-administered with supervision. Serial testing could also allow schools to relax social distancing rules, Sood said.

Researchers launched their study at a walk-up testing site in Los Angeles County during the winter surge in coronavirus cases, with 774 children between the ages of 5 and 17 being tested once with a rapid antigen test and once with a PCR test to confirm the results of the rapid test. The study showed that the rapid, inexpensive and easy-to-use antigen tests have very low false positive rates but a moderately high false negative rate that did occasionally identify someone as negative who in fact had COVID- 19, researchers said.

“The good news is that the false negative rate is low in kids likely to be infectious, as measured by viral load,” said Sood, who is also a professor of health policy, preventive medicine and business and the vice dean of research at the USC Price School of Public Policy. “Serial rapid testing may help compensate for missing the virus in the earliest stage of infection”

He noted that there is a “good chance that you will catch them when they’re infectious” if children are being tested every four or five days. The test was more than 90% accurate when focused on the sample of children with high viral loads who were very likely to be infectious, and about 99% accurate among asymptomatic children who did not have COVID-19, according to researchers.

The rapid antigen test identified about 50% of COVID-19 cases among asymptomatic children who were determined to have COVID under the PCR test, according to researchers, who noted that the majority of children had low viral loads as measured by “Ct values” — the number of times one needs to amplify the test sample to detect the genetic material of the virus.

Other authors of the study, published this week in PLOS ONE, were Anna Rodriguez of the USC Schaeffer Center, Dianna Jimenez of the Keck School of Medicine of USC; Sonia Treminino of the USC Dornsife College of Letters, Arts and Sciences, Rashmi Shetgiri and Paul Simon of the Los Angeles County Department of Public Health and Amanda Daflos of Los Angeles Mayor Eric Garcetti’s office.