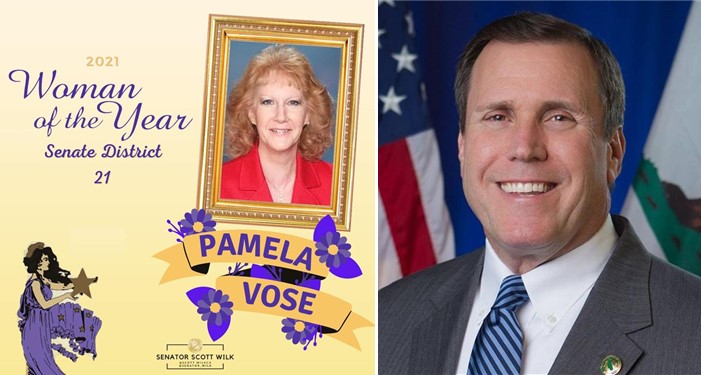 Senate Republican Leader Scott Wilk, representing the 21st Senate District, honored Pamela Vose, the Chief Executive Officer of the Greater Antelope Valley Association of REALTORS (GAVAR), as his Woman of the Year. The California State Senate recognized the honorees during a Senate floor session Monday afternoon and held a virtual ceremony that evening to honor each member’s choice for the award.

“Pamela is very deserving of this recognition and I am glad to have the opportunity to present her as the 21st Senate District’s ‘Woman of the Year,'” Wilk said. “Pamela was the obvious choice for women of the year, as few in the state work harder for their community. Her work with the Tender Loving Care (TLC) program, the ‘Be a Santa to a Senior’ program, and the ‘Homes 4 Families’ project, in particular, stand out as essential contributions to the Antelope Valley.”

“Thank you to Senator Wilk for this amazing award as he recognizes the importance that non-profits have played during the COVID shutdown,” Vose said. “Non-profits have stepped up to provide much-needed services to the community as the state’s ever-changing rules have impacted all of our lives… I humbly accept this award.”

Vose’s many accolades include:

She earned her certificate in non-profit management from Duke University and holds the designation of RCE (REALTOR Association Certified Executive). Vose has been married to her husband, Jim, for 15 years and their blended family includes one daughter and four sons.

“Pamela is a shining example of civic engagement within her community. We can all learn from her work ethic, her commitment to her family and community, and her desire to protect those on the periphery of society,” Wilk said. “People like Pamela make the 21st District a great place to call home, and if more worked with the compassion that she daily displays, the state of California would be a much better place.”