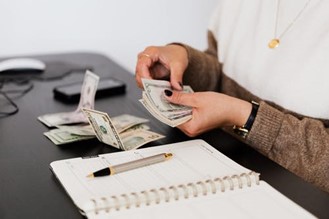 A large percentage of Los Angeles County residents struggle to meet the basic needs of housing, health care, food and education — with Black and Latino groups paying a larger share of their income for rent and Asians and Latinos less likely to visit a doctor, according a report released Wednesday.

The USC Dornsife-Union Bank LABarometer report examining affordability and prosperity in Los Angeles is the first of what will be an annual report based on a survey of about 1,800 county residents.

Among the report’s findings:

— A major percentage of renters in Los Angeles County — 44% — pay more than half their income to a landlord, much higher than the national average of 25% in 2018. Nearly two-thirds spend more than the recommended 30% of their wages on housing. By contrast, less than a quarter of homeowners have a mortgage payment greater than 30% of their income.

— Seventy percent of Latino renters are rent-burdened, as are 66% of Black renters, compared to the 58% of whites and 52% of Asians who spend more than 30% of their income on rent.

— About one in three Angelenos postponed or went without necessary medical care in 2020 because the cost was too high.

— Half of Asians visited a primary care doctor last year, compared to 67% of whites.

— About half of county residents rate the overall quality of their local schools as good or excellent. But Black parents are significantly less likely to send their children to neighborhood schools, likely due to longstanding racial inequalities in access to high-quality public education.

“It comes as no surprise that L.A. is an expensive place to live, yet the extent and persistence of L.A.’s affordability crisis remains extraordinary,” said Kyla Thomas, director of LABarometer and a USC Dornsife sociologist. “The most basic need for millions of Angelenos is the ability to afford the cost of living in L.A. That’s been a longstanding challenge that has left many residents without a safety net, which is particularly problematic during times of crisis, like the ongoing pandemic.”

The survey was conducted from Sept. 30 to Nov. 1 by the Center for Economic and Social Research at the USC Dornsife College of Letters, Arts and Sciences. The participation rate for the survey was 75%, and its margin of error is 2.6 percentage points.