UPDATE [2/5/21]: Alexander William Marquez has been arrested, the sheriff’s department announced. Marquez surrendered late Friday morning after investigators spoke with Marquez’s attorney and coordinated a time for him to turn himself in, according to sheriff’s Detective Danielle Day.

PALMDALE – Authorities Thursday released the name and photo of a man wanted in connection with a Jan. 30 hit and run crash in Palmdale that killed 17-year-old Albert Cruz and 18-year-old Sergio Martinez.

William Alexander Marquez, 34, is wanted for gross vehicular manslaughter and felony hit and run, according to a sheriff’s bulletin. He is described as Hispanic, 5 feet 9 inches tall, 180 pounds, with black hair, and brown eyes.  Anyone who encounters Marquez should contact law enforcement immediately. “Do not attempt to apprehend,” the sheriff’s bulletin states.

The fatal traffic collision occurred around 10:22 p.m. Saturday, Jan. 30, near 10th Street West and Avenue O-8, according to the Los Angeles County Sheriff’s Department and the coroner’s office.

A black 2015 Chrysler 200, believed to be driven by Marquez, was northbound on 10th Street West when the vehicle traveled through a red light at Avenue O-8 and collided with a dark gray 2018 Honda Civic that was westbound on Avenue O-8.

The occupants in the Civic [Cruz and Martinez] were pronounced dead at the scene. The Chrysler’s driver fled the scene on foot prior to the arrival of law enforcement, sheriff’s officials said.

Anyone with information on the whereabouts of William Alexander Marquez is encouraged to contact Detective Day at the Palmdale Sheriff’s Station at 661-272-2400. To remain anonymous, contact Crime Stoppers at 800-222-TIPS (8477).

UPDATE: The Palmdale Sheriff’s Station released video of the Chrysler’s driver running away from the crash. View it below: 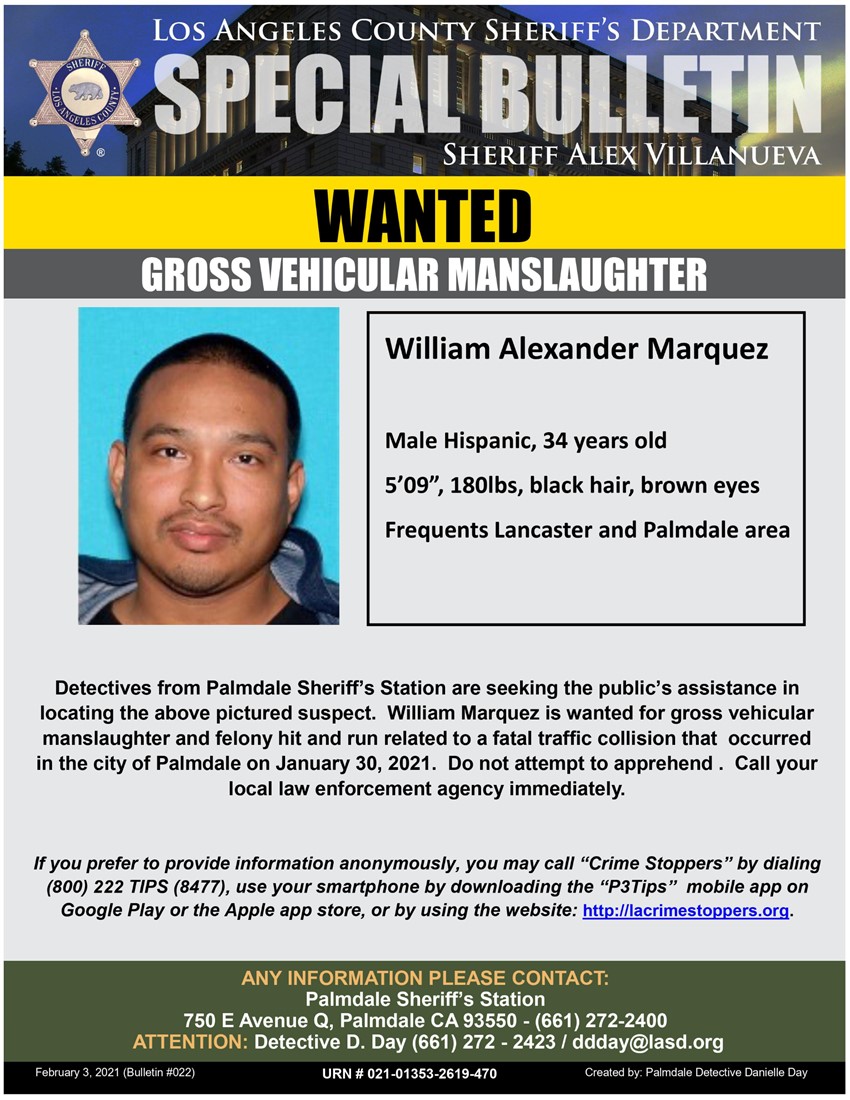