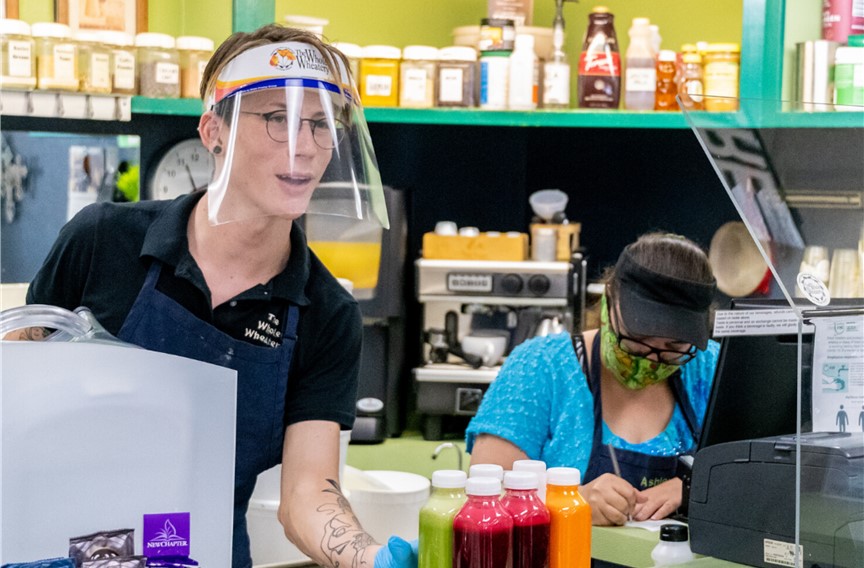 LOS ANGELES – The Los Angeles County Board of Supervisors Tuesday voted in favor of drafting an ordinance that would require national grocery and drug retailers operating in unincorporated areas of Los Angeles County — including Lake Los Angeles, Quartz Hill and Littlerock — to pay frontline workers an additional $5 per hour in “hero pay.”

Supervisors Hilda Solis and Holly Mitchell co-authored the motion calling for a temporary “urgency” ordinance that would apply to store chains that are publicly traded or have at least 300 employees nationwide and more than 10 employees per store.

“Since the beginning of the pandemic, these workers have continued to show up to their jobs despite the dangers of being exposed to COVID-19. Because of their work on the frontlines, families throughout the county have been able to access food and medicine they need during the pandemic,” Solis said. “While there is a light at the end of the tunnel … the health threats these workers face are as real as they were at the beginning of the pandemic.”

Supervisor Kathryn Barger abstained from the vote, which was 4-0.

“There’s no question that these people deserve hero pay,” Barger said, but told her colleagues that she wanted to make sure there would not be unintended consequences before offering her support.

The motion pointed to a rising number of outbreaks of the virus in grocery stores and the additional stress that workers suffer when they cannot consistently maintain distance from crowds of customers at work. Workers also bear increased child care costs incurred while kids are at home distance learning.

“These employers employ a labor workforce that consists of low-wage workers who have been disproportionately impacted by the economic fallout of this pandemic, with nearly half reporting challenges paying their bills and roughly a third having trouble paying their rent or mortgage,” the motion stated.

Solis and Mitchell said several grocery corporations offered $2 to $4 hourly raises at the outset of the pandemic, but that additional support lapsed in May.

The California Grocers Association pushed back hard, agreeing that their employees are heroes, but that the ordinance would result in higher food costs, hurting low-income families and seniors already struggling to cover those costs.

“Grocery store workers are frontline heroes, and that’s why grocers have undertaken a massive effort to institute store policies to make both workers and customers safer,” California Grocers Association President and CEO Ron Fong said. “Many grocers have already provided workers with extra pay, bonuses and generous health benefits during the pandemic as a supplement to the fair, competitive wages and benefits collectively bargained by grocery workers’ unions.

Solis and Mitchell cited a Brookings Institution study finding that a group of 13 top retailers boasted an average 40% increase in profits last year, in total earning an additional $16.7 billion, based on quarterly earnings numbers available as of November. The analysis of 13 companies included two traditional grocers, along with Walmart, Target, Amazon and a range of other retailers, including home improvement stores.

“This public health crisis and the economic unraveling have widened the already deep divide between low-wage frontline workers and their employers and shareholders,” according to the motion.

Barger said the analysis was not that simple.

“Grocery stores currently report a slim 2.2% profit margin due to additional costs and supply chain issues as a result of COVID-19,” she said. “Lacking any true dialogue on this issue with grocery store representatives, the business community and other key stakeholders, we do not know if this significant wage increase could have unintended consequences to the very people we intend to help, leading to a rise in food prices and costs for our residents and reduced hours and benefits for the employees.”

As envisioned, the ordinance would cover grocery stores, convenience stores, liquor stores and other retail locations that sell food or beverage products and have a health permit as a food market retailer issued by the Department of Public Health. It may also include retail drug stores selling groceries.

Fong urged the board to do more economic analysis, calling the plan a “knee-jerk proposal,” adding that workers themselves might be hurt if stores cut hours or lay off workers to accommodate the higher wages.

The association said in addition to increased pay and spot bonuses, some grocers have enhanced benefits and created tens of thousands of new jobs statewide since March.

The board had questions of its own about the details of the ordinance, some of which went unanswered.

Barger asked whether retailers in unincorporated areas would be required to pay the additional $5 to workers in all their stores countywide. She also wondered whether workers, like pharmacists, who make considerably more than minimum wage, would receive the “hero pay.”

Those questions and others, including whether the ordinance could apply to stores in incorporated cities were left to be resolved by county lawyers responsible for drafting the motion.

A draft is expected to be considered at the board’s next regular meeting on Jan. 26. If ultimately approved, the ordinance would be expected to stay in force for 120 days.