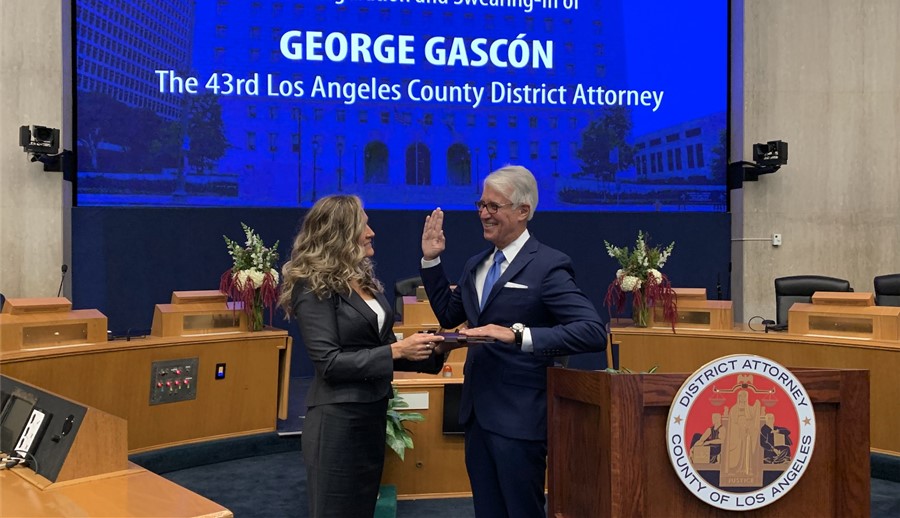 “We will work to correct the injustices of the past,” Gascon said. “This is how, in a state that led the way in ‘tough on crime,’ California can lead ‘forgive now’ and turn the tide of mass incarceration and start anew.”

In addition to working to resentence prisoners on death row to life in prison without the possibility of parole, Gascon said his office would reevaluate sentencings in thousands of cases that include gang and other enhancements. His prosecutors will no longer file gang or three-strike allegations and will dismiss those allegations on pending matters.

“Experts estimate that at least 20,000 people sentenced to prison from L.A. County are serving sentences far longer than they would receive under the charging policies I announced today,” Gascon said, putting that total at one-fifth of the state’s prison population. “Punishment must be proportional and in the community’s best interest,” he said during remarks livestreamed after his swearing-in ceremony.

Gascon said he will prioritize individuals for resentencing who have already served excessive sentences, are convicted of non-violent crimes, are deemed low-risk for release and those who are especially at risk for COVID-19. While it’s not clear how he plans to pay for such a massive undertaking, Gascon contends that the work will ultimately save taxpayers money.

“It will also save California taxpayers billions of dollars,” Gascon said. “Billions of taxpayer resources that can be put back into our communities, into public health, housing and education — the solutions that actually enhance long-term health and safety for our community.”

He said the process will include input from victims. Anyone sentenced to prison as a child will also be on that priority list, Gascon said, after pledging that his prosecutors will no longer seek to try minors as adults, effective immediately.

Even more work is ahead for local prosecutors, as Gascon said attorneys for any defendant behind bars awaiting trial for a misdemeanor or non-serious, non-violent felony charge could immediately request a hearing to revisit bail. The new D.A. said his office would not contest such requests for release, which he anticipated would involve hundreds of people.

“Our system of money bail is as unsafe as it is unjust,” Gascon said, “How much money you have in your bank account is a terrible proxy for dangerousness.”

He promised that his office would also present a plan by January to eliminate cash bail.

“It will reinvigorate the presumption of innocence in L.A. County,” he said.

Gascon’s election marks the beginning of a new era after Jackie Lacey‘s eight-year tenure. He began his remarks talking about his first law enforcement job.

“It was 40 years ago that I walked my first beat as a young Los Angeles police officer. I still remember to this day the first day that I put a uniform on. I was so proud,” Gascon recalled. But over his career as an officer, he said he found himself arresting young men who looked familiar to him, because he had taken their father or uncle or brother into custody years earlier.

“How, with all the resources that we pour into arresting, prosecuting and incarcerating, how do we fail multiple generations of the same families?” Gascon said, noting that the “phenomenon was visited exclusively on these disadvantaged communities.”

The answer, he said, is that “America is addicted to drugs” across racial lines but “the painful truth is that the disadvantaged kids that get caught tend to go to juvenile hall, while kids in wealthier communities tend to go to rehab.” Putting kids in detention perpetuates a cycle that does not promote public safety, but increases the likelihood that they will commit more crimes, he said.

The new district attorney pointed again and again to racial inequities in the criminal justice system. At one point, he asked his listeners to imagine their ideal safe neighborhood.

The D.A.’s office will no longer file first-time misdemeanor charges for quality-of-life offenses, will increase diversion programs and will offer victims’ services to families whose loved ones were killed in an officer- or deputy-involved shooting, no matter the circumstances.

“We will never get there with small incremental changes,” Gascon said. “While my methods have changed, my law enforcement journey has always been the same. It’s one about preventing crime, reducing recidivism and restoring victims.”

Even before his swearing-in, Gascon had previewed his plan to work closely with community advocates.

“I was elected by the people and this community will have a seat at the table as we work to modernize our criminal justice system,” Gascon said Nov. 18 in a written statement, as he announced his transition team. “Those that have been directly impacted by the work of this office have unique insights that are integral to an effective administration.” He noted that “our profession has largely missed the opportunity to learn from those that are justice-involved. We need to listen, grow and take this opportunity to be better.”

Gascon — a former LAPD assistant chief, onetime Mesa, Arizona police chief and San Francisco district attorney — positioned himself as a reformer in the race. Lacey finished first in the three-candidate field in the March 3 primary with 48.7% of the vote to 28.2% for Gascon. A runoff was needed because no candidate received a majority.

In the time between the runoff and the general election, Lacey continued to come under heavy criticism from activists who wanted her to be more aggressive in prosecuting law enforcement officers involved in deadly shootings. Gascon won the Nov. 3 election with 53.53% of the vote to Lacey’s 46.47%.

His transition team includes only one current employee from the D.A.’s office, Joseph Iniguez, who initially ran against Lacey for the post as the county’s top prosecutor and then subsequently withdrew from the race and endorsed Gascon.

The balance of the team is composed of members of advocacy groups seeking to end cash bail, end the death penalty and reform the juvenile justice system, among other progressive aims. It includes a man who was wrongfully convicted and others with “lived experience” with the criminal justice system.