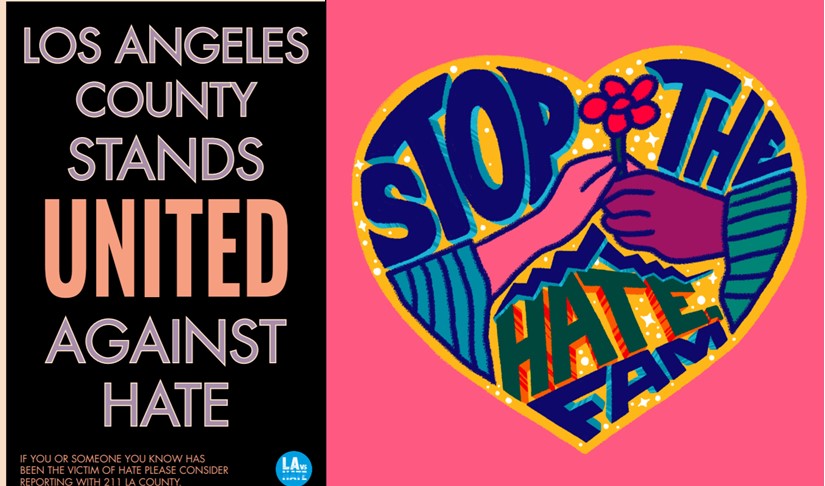 LOS ANGELES – The LA vs. Hate Coalition on Monday announced the inaugural United Against Hate Week in Los Angeles County, urging communities to reject hate and bigotry and promote inclusion. From Nov. 30 through Dec. 6, United Against Hate Week will invite LA County residents to take action against hate by going LAvsHate.org or by calling 211-LA to report hate incidents. Reporting hate to 211 can be done anonymously, 24/7, in any language, and callers can receive free counseling, support, and other assistance.

“Addressing hate comes from within our communities through a commitment to stand up for one another at the ground level,” said Supervisor Kathryn Barger. “’United Against Hate Week’ is an important opportunity to engage our local residents and provide tools and resources so that our communities can stand in solidarity against hate.”

“As the song from South Pacific goes, ‘You have to be taught to hate,’” said Supervisor Sheila Kuehl. “This means that, if hate is learned, hate can be un-learned. The best way to do that is to lift up our voices and make clear to everyone around us that, while we will often disagree, hate has no place in Los Angeles. I hope everyone will participate in the inspiring activities that have been organized for LA vs Hate week, and bring more love into the world in 2021.”

“Our diversity has made LA County an economic and cultural success,” said Otto Solórzano, Acting WDACS Director. “Especially within the context of a global pandemic and a national outcry that ‘Black Lives Matter,’ it’s more important than ever that we stand together, united against hate.”

“In the midst of racial unrest across the country, when hate activity is on the rise, and Asian Americans have been targeted with prejudice and discrimination related to the coronavirus, LA vs Hate offers people a chance to do something about it,” said Robin Toma, Executive Director of the LA County Commission on Human Relations. “Our United Against Hate Week campaign calls on everyone to do something, big or small, and become connected to the overwhelming numbers of us who are against hate and bigotry, and for love and embracing of the diversity in our county.”

Following a motion from the Board of Supervisors last year to address the rise in bias and hate acts, the LA vs Hate initiative was established. LA vs. Hate is a community-driven campaign to encourage residents and organizations to unite against and report acts of hate to 211-LA. LA vs. Hate also includes a network of community agencies that provide hate prevention and advocacy. For more information, visit www.LAvsHate.org.

The LA vs. Hate Coalition is led by the Los Angeles County Department of Workforce Development, Aging and Community Services and the LA County Human Relations Commission. For a complete list of United Against Hate Week activities in LA County, visit: https://www.lavshate.org/united-against-hate-week.