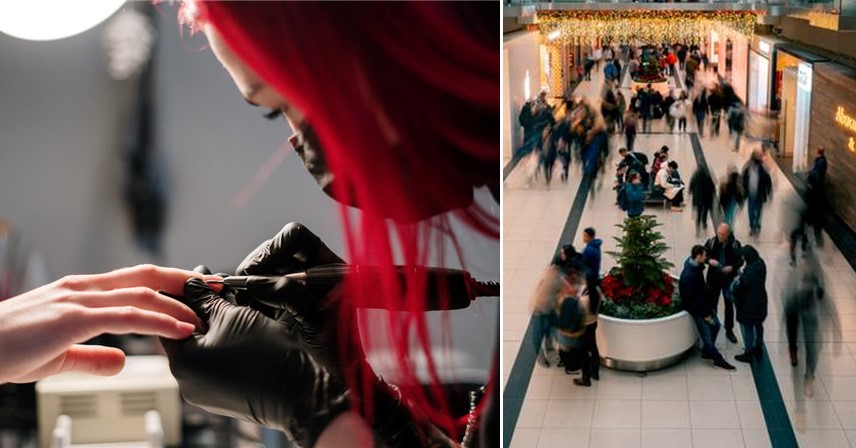 LOS ANGELES – Despite reporting another uptick in daily coronavirus cases and an upward trend in the community transmission rate of the virus, Los Angeles County officials Wednesday cleared the way for nail salons to resume indoor operations and for indoor shopping malls to reopen.

The salons and malls will be both be restricted to 25% of capacity, and public health director Barbara Ferrer encouraged nail salon operators to continue offering services outdoors. She said food courts at indoor shopping malls will also remain closed.

Outdoor playgrounds, which have been off-limits during the pandemic, can also reopen, Ferrer said, but only at the discretion of individual cities in which they are located. Anyone over age 2 will be required to wear a face-covering at the playgrounds, and no eating or drinking will be permitted.

The reopenings were announced one day after the county Board of Supervisors agreed to open a waiver process for schools to offer in-person instruction for students in pre-kindergarten through 2nd grade, and voted to reopen craft breweries, wineries and outdoor card rooms.

Timelines for those business reopenings have not yet been announced, but they are also expected to occur over the next 10 days, Ferrer said.

The openings come despite what Ferrer described as a “small increase” in daily coronavirus case numbers when compared to the early part of September. She said the increase “may either reflect lower testing numbers at the beginning of the month, or they may reflect the fact that we’re starting to see some small increases in community transmission.”

She noted that testing dipped earlier in the month when the region was hit with a severe heatwave that forced the closure of some testing centers. Fires that fouled the air with smoke also forced some centers to temporarily close.

“This may in fact help explain some of the increases that we just saw in mid-September, but we’re going to need to wait and see what we have for case counts over the next week or so,” Ferrer said.

The county’s recent positivity rate of people who are tested for the virus has been steadily dropping, now averaging 2.8%. Hospitalizations have also been falling steadily, dropping from about 2,200 a day in July to roughly 740 as of last week.

The county’s health services director, Dr. Christina Ghaly, said the county’s virus transmission rate — the average number of people a coronavirus patient infects with the illness — has seen a slight but steady rise over the last six weeks, although it dipped slightly Wednesday to reach 1.0. The rate was 1.02 last week, well above the 0.86 rate of mid-August.

When the rate is below 1.0, case numbers invariably begin to decrease across the county, but when it rises to 1.0 or higher, cases are likely to increase.

Ghaly said the rise or fall of the rate depends on residents’ adherence to basic health requirements, such as wearing face coverings, maintaining social distance and practicing personal hygiene such as frequent hand-washing.

“When we’re not following those basic health measures, as we’ve seen again and again, that … (transmission rate) goes up and that’s what threatens the possibility of reopening for us all,” she said.

Reliance on residents’ adherence to health restrictions plays a major role in the decision to reopen more businesses. Despite the recent increase in cases and the transmission rate, Ferrer said the county was prepared to move ahead with the additional business reopenings — but health officials are hoping business owners and customers will continue to take precautions.

“We have determined that with really good adherence — and this is critical — to the directives that are in place, these are activities that we think can be done with a lot of safety,” Ferrer said. “And if they’re done with a lot of safety we’re hopeful that we won’t see a big surge in cases. It’s pretty easy to know when things aren’t going well because our cases tend to increase within a couple of weeks.”

The county reported another 30 coronavirus-related deaths on Wednesday, lifting the countywide number since the start of the pandemic to 6,551. Ferrer also announced another 1,063 cases of the virus, raising the cumulative total to 269,284.

Since the start of the pandemic, health officials have confirmed 4,157 coronavirus cases and 71 deaths in Palmdale; 3,445 cases and 55 deaths in Lancaster; 179 cases and 11 deaths in Quartz Hill; 236 cases and four deaths in Lake Los Angeles; 187 cases and one death in the Littlerock/Pearblossom, Juniper Hills areas; and 166 cases and two deaths in Sun Village. View the latest detailed report here.

There were 734 people hospitalized in the county as of Wednesday, up from 714 on Tuesday and from 663 on Monday.