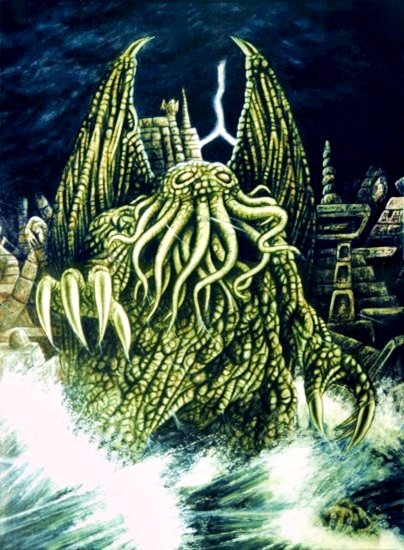 There are lots of different authors that define “horror” in lots of different ways. There are so many opinions because horror, like every other emotion, is subjective. What terrifies one person might bore the pants off another. Stephen King puts horror into three categories, for instance: The gross-out, horror, and terror. The gross-out is where saw blades come off and shred a man to pieces. Horror is unnatural, where potatoes have literal eyeballs. And terror is when the lights go out and you feel someone breathing down your neck, but nothing is there.

You merely hear a whisper, almost silent, like a gentle breeze down your neck, that says, “Your Fair Go Casino account has been emptied…”

However, I want to talk about a specific sub-genre: Lovecraftian horror. Also known as Gothic Horror, Cosmic Horror, and other such variations.

The genre is derived from the works of Howard Philip Lovecraft, a New England racist and prolific pen-pal. He was a sickly child, and his family lived off a dwindling inheritance. Although he began writing as early as 1913, it was mostly journalistic work until 1916, when he published his first short story, “The Alchemist”, which began his fiction career. He died in 1937, at the age of 46.

He was survived by work, however, including “The Shadow of Innsmouth”, “Dagon”, “The Cats of Ultar”, “The Terrible Old Man”, among many others, and, most famously, “The Call of Cthulu”. It’s from these works that the “Cthulu Mythos” was derived, and from which the genre of Lovecraftian horror spawned.

However, the term “Lovecraftian” probably gets thrown around a little too easily when describing anything with giant space-monsters, that may or may not be horrific. Since I’m a fan of both Lovecraft’s work and video games, I’m often thinking of the two in tandem.

There is a whole load of games that describe themselves as “Lovecraftian”, but hardly do justice to the source material. There are games that try, like “The Sinking City” and various “Call of Cthulu” titles, but fail for one reason or another, and then there are those blatantly spoofing on the genre, like the “Cthulu Dating Sim” or whatever.

I’m always looking to see if there’s a video game that does Lovecraft justice because they’re antithetical to one another. Video games are about empowering the player. You reach the end of the game, and “You win!” Lovecraft’s work, on the other hand, is about how humanity is irrelevant and merely a footnote in the history of the cosmos. There are entities out there so vast, alien, and incomprehensible, our little monkey brains can’t fathom their mere presence. As a result, Lovecraft’s protagonists nearly all end up dead or insane by the end of the story, because against such beings of unimaginable magnitude — You. Can’t. Win.

By the way, that’s not a universal concept in horror. In “Aliens,” Ripley defeats the Xenomorph. Schwarzenegger defeats the Predator. The demon gets successfully exorcized in “The Exorcist.” Lovecraft isn’t the only author who has his protagonist lose, but his works are unique in the fact that his heroes can never win. Any perceived victory is but a fleeting blip that only delays the inevitable end that comes from cosmic entities that have the patience to wait out humanity’s existence if they so choose.

Do you see the challenge of designing a video game around that? Lovecraft’s anti-anthropocentrism (a word I’m so happy I could throw in here) themes run counter to the very nature of video games.

You see, it’s easy to get the basic aesthetic. Squid monsters. Aliens. The Deep Ocean. Robes. Cults. Incantations. Private Eyes going slowly insane. But that’s the easy part. If the game allows you to pull out a sidearm and pop a cap between Cthulu’s eyes, then it’s missed the point completely.

What interests me more is games that are not obviously Lovecraft inspired. You see, I watched a bit of a YouTuber named Markiplier play through a small game called, “Darkwood.” The game is all about surviving in a word where the woods are reclaiming everything. Trees grow larger and taller than ever, they block out the sky and grow back faster than they can be chopped down. A large part of humanity has morphed into monsters, while the rest slowly go mad… or are otherwise “Changing.” So I was watching Markiplier play through this game and I wondered, “Is this game Lovecraftian?”

On the surface, Darkwood doesn’t share any of the usual Lovecraftian traits. No cults, no squid monsters, and no direct adaptation of any of Lovecraft’s work. The developers probably weren’t thinking about it at all when designing their game (a very good game, don’t get me wrong).

Yet there’s something about it that strikes me as “Lovecraftian.” There’s a strange, unearthly power that’s slowly eroding away humanity. The main character is being beckoned by some inexplicable urge to move deeper into the forest. The player is barraged by strange dreams, visions, and bizarre monstrosities. I won’t spoil the ending, but given how I’ve described “Lovecraftian” stuff so far, I suppose you can make an educated guess as to how it turns out for the main character.

In short, Lovecraft wrote some really cool themes that I wish more video games did justice to. While his aesthetic is iconic, and rightfully so, I wished more things went a little deeper than “Squid monsters”. The End.