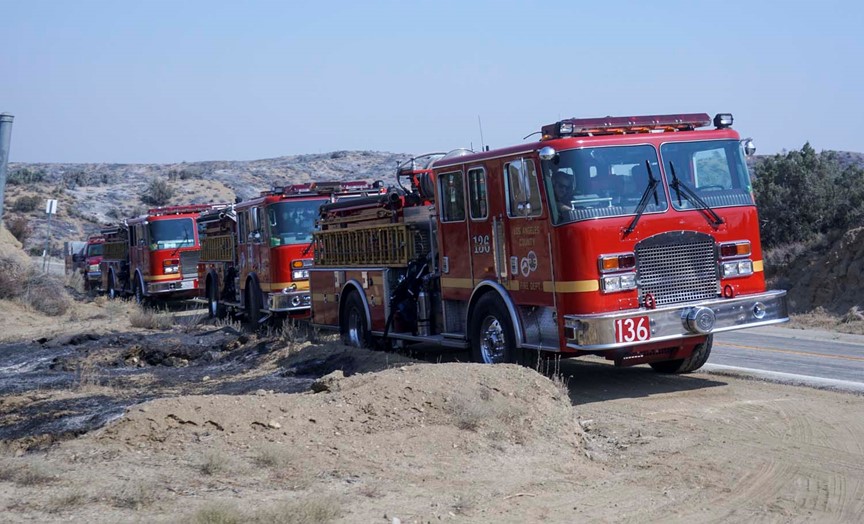 LOS ANGELES  – Some evacuation warnings were lifted and repopulation efforts were underway Friday as firefighters attained 55% containment of the 113,986-acre Bobcat Fire burning in the Angeles National Forest, according to fire officials.

There are currently 1,575 personnel assigned to fire, the Los Angeles County Fire Department reported.  Full containment is not expected until Sept. 30.

“Crew, engines, equipment and aircraft work in coordination to build holding lines, plumb the lines with water, and while firing aviation assets slow the movement of the main fire,” according to an InciWeb news statement. “… A focus of our efforts (Friday and Saturday) will be securing the west side of the fire before winds shift to the northeast Sunday.”

About 7 a.m. Thursday, Sept. 24, evacuation warnings were changed to a “repopulation order” with “no restrictions” for the following areas:

The Bobcat Fire increased in size slightly overnight Thursday from 113,733 acres to 113,986 acres, and containment expanded from 39% to 50%, forest officials said.

A South Coast Air Quality Management District’s smoke advisory was extended through Friday afternoon, with winds expected to push northeast and east into the San Gabriel and San Bernardino mountains.

U.S. Forest Service officials are investigating an equipment issue experienced by Southern California Edison around the time the fire broke out to determine if it was a factor in sparking the Bobcat Fire, one of the largest wildfires in Los Angeles County history.

Firefighters earlier this week successfully set backfires, including from the air, to destroy vegetation fueling the blaze and protect the Mount Wilson Observatory and several broadcast and telecommunications towers.

The fire is burning in the Angeles National Forest and threatening communities in the Antelope Valley and San Gabriel Valley foothills.

A closure order has been issued for national forests in Southern California, including the Angeles National Forest, which will be closed through Oct. 1, the U.S. Forest Service said.

Flames have destroyed 52 structures and affected another 14, with three sustaining minor damage and one major damage, according to a damage assessment provided by Los Angeles County officials. That map, which is compiled from ongoing field damage inspection and subject to change, can be viewed at lacounty.gov/recovery/damage-inspection/.

Of the 52 buildings destroyed, 27 were residential, one was commercial and 24 were described as “other.”

The Nature Center at the Devil’s Punchbowl Natural Area was destroyed by the fire, Los Angeles County parks officials said. The area is closed until further notice.

The fire has burned more acres than the Woolsey Fire of 2018, which scorched 96,271 acres, the Los Angeles County Fire Department said Tuesday. The Station Fire in 2009 burned 160,577 acres.

The Bobcat Fire erupted on Sept. 6 near the Cogswell Dam and West Fork Day Use area northeast of Mount Wilson and within the Angeles National Forest.