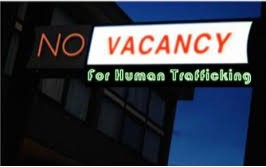 LOS ANGELES – The Los Angeles County Board of Supervisors voted Tuesday to develop an ordinance to crack down on human and sex trafficking, targeting motels, hotels, massage parlors and sports and entertainment venues.

Supervisors Mark Ridley-Thomas and Janice Hahn co-authored a motion calling for enforcement at the local level.

“Organized criminal enterprises have been known to transport victims – – many of them underage — to large-scale athletic competitions in order to sell them for sex,” Ridley-Thomas said. “With Los Angeles destined to host the Super Bowl in 2022 and the Summer Olympics in 2028, it is not too early to prevent the depraved and often clandestine crime of human trafficking.”

The ordinance as envisioned would require a wide range of businesses to post a hotline number for reporting human trafficking. State law requires postings at locations where such crimes are known to occur, like strip clubs and other adult businesses, and where victims might seek help, such as hospitals and urgent care centers. However, that law has been inconsistently enforced across jurisdictions, according to Ridley-Thomas.

In Los Angeles County, the National Council of Jewish Women/Los Angeles and the Coalition to Abolish Slavery and Trafficking have been among the strongest advocates against trafficking. CAST did a study more than six years ago that found that 300 of the 800 businesses covered by state mandates were in unincorporated areas subject to county oversight.

Trained volunteers subsequently reached out to business owners and managers but found that they resisted displaying the poster with the hotline number. Advocates concluded that the county’s power to levy fines for noncompliance could make a difference.

The county ordinance — which is expected to cover both sex and labor trafficking — is expected to allow for routine inspections of businesses where trafficking is suspected and fines and penalties for those who fail to post the hotline notice.

The county has long adopted an enforcement strategy that penalizes those who buy sex, while decriminalizing the act of selling sex. The emphasis has been on resources and counseling to help those selling sex, especially those who are underage, find a better way of life.