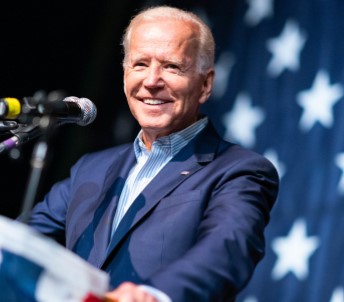 “This year’s presidential election confronts voters with the most consequential choice they have faced in decades, and for many, their lifetimes: between a divisive, authoritarian-leaning incumbent and a seasoned patriot who brings not only five decades of experience, ability and commitment to American values, but also bold ideas at a time of national crisis. Nothing less than the health of our constitutional democracy is at stake,” The Times wrote in a front-page editorial on its online edition.

“So stark is the contrast between Donald Trump and Joe Biden that we feel compelled to announce our endorsement of the Democratic nominee and his running mate, Sen. Kamala Harris of California, now, at what is traditionally the beginning of the fall campaign and before the candidates take part in televised debates. We will watch those exchanges with interest, but it’s inconceivable that anything that will be said on the debate stage will close the cavernous fitness gap between the two candidates.”

The Times wrote that re-electing Presidnt Donald Trump “would be a calamity. Trump’s trafficking in falsehoods; his stoking of racial divisions; his inability to distinguish between the national interest and his personal interests; his attempt to ride a false and dangerous narrative about ‘anarchy and mayhem’ to reelection all require repudiation by the voters.”

“He has pursued policies at home and abroad that have harmed working Americans, exacerbated inequality, weakened the United States and strained America’s alliances. Even actions that can be defended — such as his support for modest criminal-justice reform or his attempt to negotiate an agreement with North Korea over its nuclear weapons program — have been marred by exaggerated claims or amateurish execution,” the Times wrote.

According to The Times’ editorial board, “Biden isn’t just preferable to Trump; in many respects he is Trump’s antithesis.”

“Biden has a record of seeking expert advice and listening to it. Progressives may take issue with his choice of advisers, many of whom are establishment figures he’s known for years. But he clearly has a level of respect for data, science and research that the incumbent does not. As 81 U.S. Nobel Prize winners in chemistry, physics and medicine wrote in an open letter endorsing Biden, ‘At no time in our nation’s history has there been a greater need for our leaders to appreciate the value of science in formulating public policy.'”

Temperamentally, too, Biden seems like “an ideal fit for our polarized time,” according to The Times’ editorial, which called the former vice president “a  famously empathetic figure.”

The editorial concluded: “To the surprise of supporters and detractors alike, Biden, a 77-year-old centrist, first elected to federal office 48 years ago, has mounted a disciplined campaign. He is poised to wrest the White House from an unfit incumbent but also take the nation in a progressive direction. We enthusiastically endorse his election.”