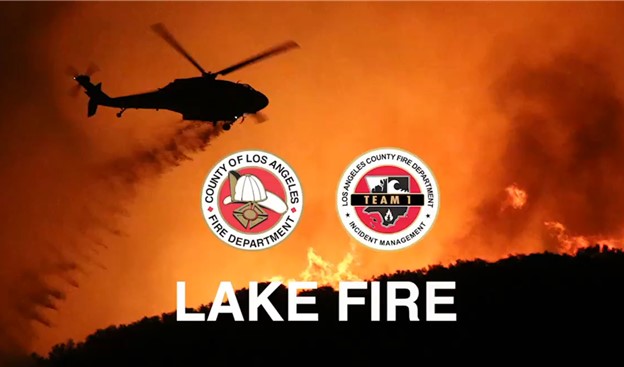 LAKE HUGHES – The Lake Fire burning near Lake Hughes was 95% contained Wednesday morning as firefighters patrolled the fire line to ensure that flames did not escape containment.

The fire, which has burned 31,089 acres, has been burning 100-year-old fuels consisting of Big Cone Douglas Fir, Oak and Gray Pine, according to the U.S. Forest Service.

Firefighters have been monitoring the fire area for pockets of isolated heat and smoke and full containment of the fire is expected by Sept. 12, the Forest Service said.

About 260 firefighters were assigned to the fire, Angeles National Forest officials said.

Firefighters will continue to patrol the fire perimeter, mitigate any hot spots and seek to guard against any threat of spread, officials said.

The cause of the Lake Fire remains under investigation.