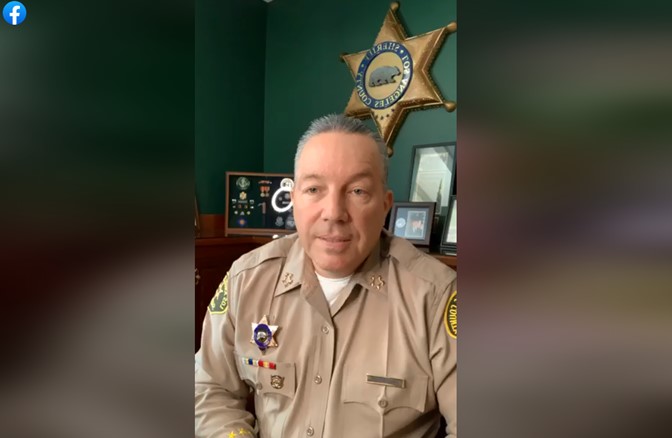 LOS ANGELES – In a live online question-and-answer session Wednesday with members of the public, Los Angeles County Sheriff Alex Villanueva addressed concerns that deputies are failing to follow public health orders that require them to wear masks on the job.

“It’s our concern too, the use of the masks. … We want to flatten the (coronavirus) curve obviously,” Villanueva said. [View the video below] “Deputies have been responding to fires, civil unrest and murder scenes … in this extreme heat, there’s a lot of concern about wearing the masks in addition to all the other restrictive gear the deputies are wearing.

“Between the vests, the 15-pound belts, helmets, shields, all these things, the physical exertion in the field, not easy. But they need to wear them whenever they can, that means when they’re contacting civilians, citizens when they’re in buildings, they need to throw those masks on, and we’re working hard to enforce that,” Villanueva said.

Inspector General Max Huntsman reported the issue Friday, Aug. 21, to the Los Angeles County Board of Supervisors and a watchdog agency that oversees the sheriff’s department. Both statewide and county orders mandate the use of face coverings and the sheriff’s department issued its own order mandating face coverings on April 15 — well ahead of state and county officials.

Huntsman sent a letter raising the issue to Villanueva on June 25 and allegedly received no response. A total of 816 employees of the sheriff’s department have tested positive for the virus, according to the department’s website.

The sheriff went on to say that Huntsman’s letter “got weird” when the Inspector General “stretched that somehow to deputy gangs. Not sure how he made that connection. And then from there, he went into the Sassafras party allegation.”

Huntsman’s letter called for subpoenaing records to get to the bottom of accusations that the department may have booked a party at the Sassafras Saloon in Hollywood early this month, despite state orders prohibiting bars from opening.

The sheriff’s department denied that the people shown in the video were their employees, calling the allegations “categorically false” and adding that the video appeared to be a hoax perpetrated by social activists.

Villanueva said Wednesday that “It looks like it was a hoax, intended to smear the reputation of the sheriff’s department. It failed on all counts, but leave it to Max Huntsman to try to keep that flame alive and well. What concerns me is that this has been thoroughly debunked, and why is he still holding onto this thing? That really is a sad note to Mr. Huntsman’s investigative skills and, I don’t know, his integrity as an alleged investigator.

“When we do an inquiry, which we did, and we found out it had nothing to do with us, there’s no fancy investigation that’s going to follow when we’ve already answered the question. It’s done, it’s over. Move on; we have. But Mr. Huntsman? That’s not him.”

Huntsman said the company booking the venue said the party was booked for the benefit of the sheriff’s department. However, the bar’s owner/operator, 1933 Group, issued a statement to Eater Los Angeles saying it was not booked by the department directly.

“We were approached by an individual who requested to book a private event to honor a group of first responders. It was not a booking by the LA County Sheriff’s Department directly, and we cannot confirm whether LASD staff were present,” the company said in its statement. “Any claims put forth on social media are not substantiated, as we have no evidence that LASD individuals were at the event. Our team places the utmost importance on COVID safety standards, and we did everything possible to provide our staff and guests with two outdoor spaces that completely complied with current safety precautions and social distancing expectations.”

That did not seem to satisfy Huntsman.

“Should this event have been organized or attended by sheriff’s department personnel, the lack of compliance with state mandates is another example of department personnel disregarding a state directive and sending the public a message that sworn deputies are above the law,” Huntsman said.

On the issue of alleged gangs within the sheriff’s department, Villanueva took the Civilian Oversight Commission to task for last week’s meeting concerning alleged deputy cliques.

Alleged deputy subgroups or cliques — including the so-called “Banditos” group — have long plagued the sheriff’s department. The Los Angeles Times had reported that the county has paid out roughly $55 million in settlements in cases dating back to 1990 in which sheriff’s deputies were alleged to belong to violent secret societies, in which deputies get tattoos to show their involvement.

The issue came to a head in 2018 when a melee erupted among East Los Angeles deputies during a party at Kennedy Hall. Villanueva has stressed that the fight occurred 10 weeks before he took office, but he said he made sure the department acted: removing that station’s leadership team and transferring 36 sworn personnel to other stations.

Villanueva said following a full investigation into the Kennedy Hall fight, 26 deputies were being sent letters of intent notifying them of possible suspension or termination.

“You would think that we never did anything,” the sheriff said Wednesday. “We had 26 people receive letters of intent to either suspend or terminate their employment with the sheriff’s department. That is a huge step forward; in fact, that’s the first time ever a sheriff has done something that broad in scope. We’re actually asking the questions … we’re asking deputies whether or not they’re participating in one of these groups, and if they have the infamous tattoos.

“Are we gonna strip down 18,000 employees and check their legs for tattoos? No, we’re not gonna do that. And it’s scary to hear that from attorneys on the Oversight Commission talking about this as if they’ve never heard of the First Amendment or the Bill of Rights, and also the 14th Amendment — due process.”

“I would really love to have the entire Assembly join us with these protesters last night when they were throwing a tire iron, lead pipe and metal barriers at the skirmish line,” he said, referring to protests in downtown Los Angeles over the shooting of a Black man in Kenosha, Wisconsin.

“This is a step in the wrong direction … when you take away less-lethal options, you’re reducing the options available to law enforcement when there’s a need to use force to just their hands, their batons or lethal options. Why would you want to withdraw or reduce options? You actually want to increase options,” he said.