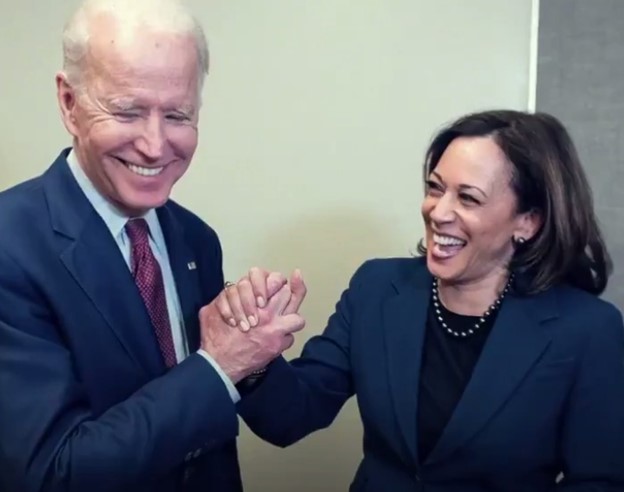 LOS ANGELES  – Los Angeles resident and California Sen. Kamala Harris was formally introduced as presumptive Democratic presidential nominee Joe Biden‘s running mate Wednesday, hailing the women she said have paved the way for her to be on a presidential ticket.

“Joe, I’m so proud to stand with you,” Harris said in Delaware during her first appearance alongside Biden following his Tuesday announcement of his choice of running mate.

“And I do so mindful of all the heroic and ambitious women before me whose sacrifice, determination and resilience makes my presence here today even possible,” Harris said. “This is a moment of real consequence for America. Everything we care about — our economy, our health, our children, the kind of country we live in — it’s all on the line.”

Although her personal and political roots are in Northern California, Harris is a resident of the Brentwood area of West Los Angeles.

Harris wasted no time Wednesday attacking President Donald Trump, criticizing his response to the coronavirus pandemic and blaming his for plunging the country into economic turmoil.

“He inherited the longest economic expansion in history from Barack Obama and Joe Biden, and then, like everything else he inherited, he ran it straight into the ground,” Harris said. “Because of Trump’s failures of leadership, our economy has taken one of the biggest hits out of all the major industrialized nations, with an unemployment rate that has tripled as of today.

“This is what happens when we elect a guy who just isn’t up for the job,” she said. “Our country ends up in tatters, and so does our reputation around the world.”

Trump has been vocal in his criticism of Harris since Biden made his announcement Tuesday. He denounced her during a White House press briefing Tuesday afternoon as “nasty,” pointing to her comments during the Supreme Court confirmation hearings of Justice Brett Kavanaugh.

During an appearance on Fox News Tuesday night, Trump continued his criticism, saying Harris is “the most liberal person supposedly in the Senate, and that’s pretty liberal.”

“I’m not sure that’s what the country wants,” he said. “I figure if it is, we’ve got problems. But I would be surprised if it is. She wants to raise taxes. She wants to get rid of your Second Amendment — no guns for protection, no nothing.

“I don’t quite get the choice, but we’ll have it out. We have a great vice president named Mike Pence and he will take care of business just like he did last time against a different candidate,” Trump said.

On Twitter Wednesday morning, Trump wrote that Harris “started out strong in the Democrat primaries, and finished weak, ultimately fleeing the race with almost zero support. That’s the kind of opponent everyone dreams of!”

Harris countered in her speech: “Let’s be clear. This election isn’t just about defeating Donald Trump or Mike Pence. It’s about building this country back better, and that’s exactly what Joe and I will do.”

We are in a battle for the soul of this nation. But together, it’s a battle we can win.@JoeBiden—I’m ready to get to work. pic.twitter.com/3PJcUTYBGU