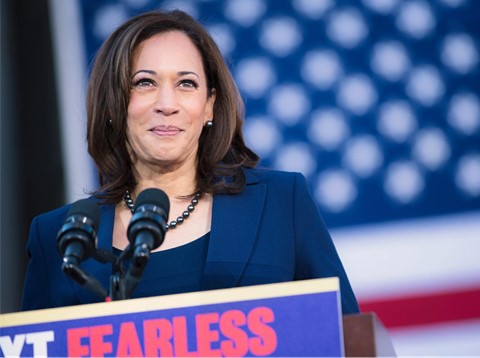 “I have the great honor to announce that I’ve picked (Harris) — a fearless fighter for the little guy, and one of the country’s finest public servants — as my running mate,” Biden announced via his Twitter page.

Harris, 55, is the first Black and South Asian woman to run on the ticket of a major political party. Biden vowed during a primary debate in March that he would pick a woman as his running mate.

After the selection was announced, Harris wrote on Twitter: “Joe Biden can unify the American people because he’s spent his life fighting for us. And as president, he’ll build an America that lives up to our ideals. I’m honored to join him as our party’s nominee for vice president, and do what it takes to make him our commander-in-chief.”

The selection ended hopes of Rep. Karen Bass, D-Los Angeles, of becoming the vice-presidential candidate. She was among those being vetted for a spot on the ticket.

Bass took to Twitter to hail the selection of Harris.

“Her tenacious pursuit of justice and relentless advocacy for the people is what is needed right now,” Bass wrote. “I worked closely with her when I was in Sacramento and she was the District Attorney in San Francisco. I continue to work closely with her here in Washington, D.C., as we push to reform our nation’s policing system. California is better because of her work as attorney general and stronger because of her work as senator. Now all Americans will benefit from her work as vice president.”

“She is passionate. She is powerful. She is brilliant. She is compassionate,” Garcetti said. “Kamala Harris will help Joe Biden unite the American people, restore our nation’s soul, and rebuild our country so it’s even stronger than it was before.

“I’m proud that our vice-presidential selection process vetted and elevated so many women, each of whom is qualified to lead our country. This was not a political process. We worked to build a team — one that puts women at the table, one that looks like America, and one with the patriotism, qualifications and unity to help Joe Biden conquer this virus and build back better.”

Harris mounted a presidential campaign of her own, grabbing early headlines for a daring attack in the first debate against a fellow candidate — Biden — challenging his past opposition to busing to integrate schools. But she ultimately dropped her campaign.

Before serving as Senator and state attorney general, Harris was the first Black woman to serve as San Francisco district attorney. Harris will be the first California candidate on a major political party’s presidential ticket since Ronald Reagan in 1984.

Not surprisingly, the selection met with quick criticism from President Donald Trump, who tweeted a campaign video attacking Harris, saying she launched her failed presidential bid by “rushing to the radical left, embracing Bernie’s plan for socialized medicine, calling for trillions in new taxes, attacking Joe Biden for racist policies.” The ad concludes, “Sloe Joe and Phony Kamala: perfect together, wrong for America.”

But reaction among Los Angeles County community leaders and Democrats was swift and expectedly glowing.

Melina Abdullah, one of the founders and leaders of Black Lives Matter Los Angeles, wrote, “As much as I wanted it to be (Bass), I told y’all from the beginning that (Biden) was gonna pick (Harris). Somebody owes me a dollar.”

“Throughout her career, Senator Harris has demonstrated an unwavering commitment to civil rights and social justice for all LGBTQ+ people,” Chavez said in a statement. “As vice president, we are confident she will continue Vice President Biden’s tradition of using the office to champion and advance full, lived LGBTQ+ equality — and equality for the diverse communities to which LGBTQ+ people belong.”

“The daughter of immigrants, Senator Harris’ long, distinguished career not only as a public servant fighting for justice, but her continuous fight for working families all across our country is exactly what our nation needs in this crucial time,” Gonzalez said.

“We’ve worked together to address toxic sewage flowing across the border, secure coastal bluffs, improve housing for military families and much more,” Levin said. “Her work on civil rights and racial injustice has been critical for our nation, and her continued leadership is needed now more than ever. Together, Joe and Kamala will lead us out of the health and economic crises we’re facing and restore dignity to the White House.”

Rep. Maxine Waters, D-Los Angeles, wrote on Twitter that Biden had made a historic selection.

“I believe that the two of them together will respect and honor our constitution, strengthen our democracy and economy and work for a good quality of life for our children and families,” Waters wrote.