LANCASTER – A 36-year-old male passenger was killed in a crash Saturday in Lancaster, and the 33-year-old woman driving the car was arrested on suspicion of DUI, authorities said.

The crash happened just before 4 a.m. Saturday, Aug. 8, at West Avenue E and 30th Street West, according to the California Highway Patrol.

Lancaster resident Jamie Levy was driving westbound on Avenue E in a 2014 Scion TC, approaching 30th Street West at an undetermined speed, when she failed to stop for the posted stop sign at the intersection and allowed the car to leave the roadway, where it struck a dirt berm, the CHP said.

Her male passenger, 36-year-old Arturo Rosales Jr. of Lancaster, was pronounced dead at the scene, according to the Los Angeles County Coroner’s Office.

Levy, who suffered moderate injuries, was taken to an area hospital and eventually arrested and booked on suspicion of driving under the influence of alcohol and/or drugs, according to the CHP. She is being held on $100,000 bail, officials said.

“The involvement of alcohol and/or drugs is believed to be a factor in this collision,” the CHP said in a statement. “Tragically, another life was lost here in the Antelope Valley. This is the 26th person killed so far this year in the CHP Antelope Valley area jurisdiction.”

Anyone with information regarding the crash is encouraged to contact the CHP’s Antelope Valley Area office at 661-948-8541. 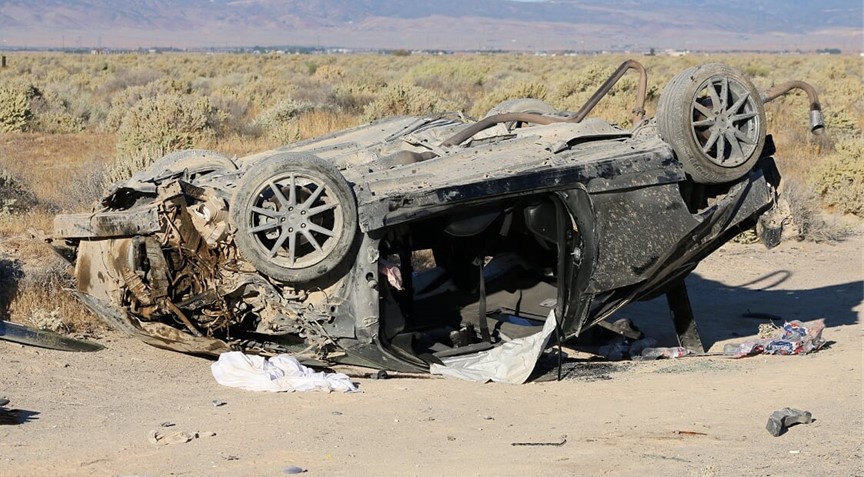