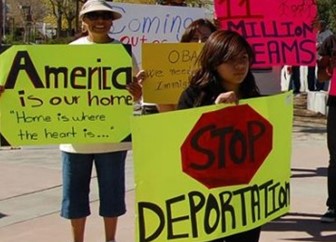 LOS ANGELES – California Governor Gavin Newsom and the Los Angeles County Board of Supervisors Thursday praised the U.S. Supreme Court for rejecting President Donald Trump‘s effort to dismantle the Obama-era program that protects from deportation some 800,000 immigrants brought into the country illegally as children.

“Today’s decision is an important victory, for now, for the hundreds of thousands of Dreamers — including over 200,000 Californians — who contribute deeply to their communities each day. They are our neighbors, our coworkers and our friends, and in California, we will continue to have their backs,” Newsom said in a statement.

With Chief Justice John G. Roberts Jr. leading the majority, the court ruled 5-4 against the administration. It called the decision to cancel the DACA (Deferred Action for Childhood Arrivals) program arbitrary and unjustified. The program allows young people who were brought to the country as children to register with the government and obtain a work permit if they have clean records.

“Dreamers embody the values of this country through their work ethic, their optimism and unwavering loyalty to this nation,” Solis said. “DACA recipients are military veterans, medical students and employees of Fortune 500 companies. Dreamers are our friends, family members, employers and neighbors.”

“It reminds us once again of the importance of the checks and balances that have guided our Democracy, especially in the face of an administration that has continually attacked a community that is so vital to every facet of our country,” Ridley-Thomas said. “… However, even with today’s positive news, we must not let our guard down.

Trump blasted the court’s action, calling the DACA decision and other recent rulings “shotgun blasts into the face of people that are proud to call themselves Republicans or conservatives.”

“The recent Supreme Court decisions, not only on DACA, sanctuary cities, Census and other, tell you only one thing, we need NEW JUSTICES of the Supreme Court,” Trump wrote on Twitter. “If the radical Left Democrats assume power, your Second Amendment, right-to-life, secure borders and religious liberty, among many other things, are OVER and GONE.

Kathryn Barger, Chair of the L.A County Board of Supervisors, said, “I join my colleagues in celebrating the Supreme Court ruling to protecting Dreamers as a significant victory for the thousands of children who came to this country at a young age and are now integral members of our community. The County will continue to review and identify the necessary programs and services to support this population, working together with our partners and stakeholders. This is yet another reminder of the crucial need to for the Federal Government to develop and implement comprehensive immigration reform.”