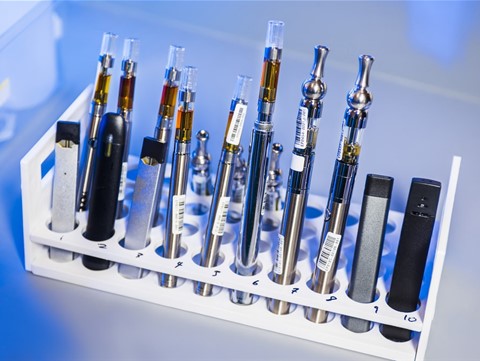 The suit, filed by the California Smoke & Vape Association and tobacco retailer Cigs Plus against the city of Palmdale, alleges the law is “overbroad” and will “destroy Palmdale’s nicotine vapor product industry, and damage the livelihoods of the workers that it employs.”

A member of the Palmdale city attorney’s office said the office had not yet received the complaint and declined comment.

The law intends to curb tobacco use among youth, and also prohibits the sale of tobacco- and menthol-flavored vaping products, which have “little to no effect on the recent increase of youth tobacco consumption,” the lawsuit alleges.

The ban, approved by the Palmdale City Council six months ago, is aimed at the fruit- and candy-flavored products popular among high school-aged youth.

The vape association is comprised of wholesalers, manufacturers of nicotine-containing flavored e-liquids, and brick-and-mortar retailers. The suit alleges that Cigs Plus and its employees “now face financial ruin as a result of the ordinance.”

The complaint seeks a court order permanently halting enforcement of the law, and reimbursement of legal fees.