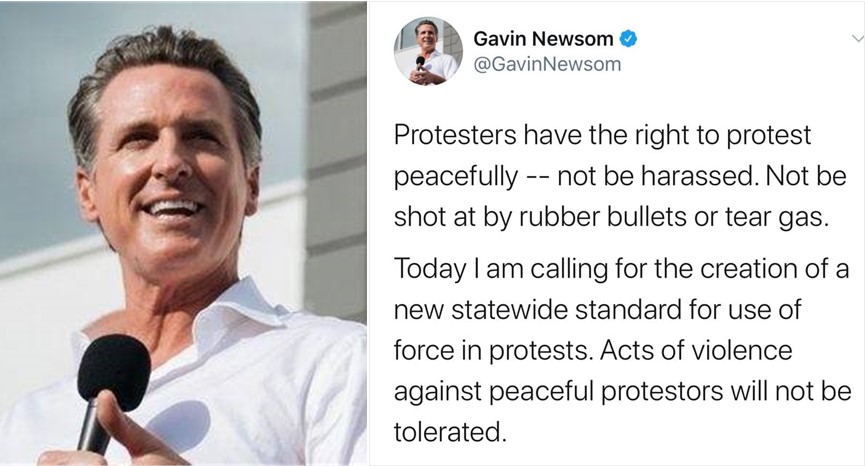 LOS ANGELES – Following a week of sometimes-contentious protests in Los Angeles County and beyond that have prompted some allegations of excessive force by police, Gov. Gavin Newsom Friday called for the development of statewide protocols for the use of tear gas and rubber projectiles.

Newsom also ordered that law enforcement officers in the state no longer be trained in the use of carotid restraint holds that are employed to render suspects unconscious, but can be potentially deadly.

“We cannot see the kinds of techniques that tragically and ironically we train,” Newsom said. “I own this. We own this. Across this country we train techniques on strangleholds that put people’s lives at risk. Now, we can argue that these are used as exceptions, but at the end of the day, a carotid hold that literally is designed to stop people’s blood from flowing into their brain? That has no place any longer in 21st Century practices and policing.”

Newsom said he was directing California’s Peace Officer Standards and Training, or POST, to immediately halt training on such holds.

Earlier this week, more than a dozen San Diego-area law enforcement agencies announced they were halting use of the carotid restraint. Assemblyman Mike Gipson, D-Carson, introduced legislation Thursday to formally eliminate carotid restraints in the state.

Meanwhile, a pair of San Diego Assembly members, Lorena Gonzalez and Shirley Weber, co-sponsored proposed legislation this week designed to establish statewide standards for the use of rubber bullets. Newsom on Friday backed that effort, with his call for standard protocols for such less-than-lethal crowd-control measures.

“… They have the right not to be harassed, not to be denied, not to be arrested for peaceful protesting. Period, full stop. But it’s clear from the images we see on TV on the reality of a grandmother in La Mesa, California, that’s in the hospital that some people are denied that fundamental right, and that we’re not seeing people treated equally all across the state of California,” Newsom said.

Newsom again attested to what he called a system of justice that has been historically discriminatory against people of color.

“We have a criminal justice system — I don’t think this, I know this as governor, I live this every day — a criminal justice system that treats people who are rich and guilty a hell of a lot better than it treats people that are poor and innocent. You know that and I know that. So why aren’t we doing something about it? We’re trying our best here in the state, but we have to do more still better,” Newsom said.

He added, “One thing is clear to me — we have a hierarchy of values in this country that diminishes certain people based on the color of their skin. And we have perpetuated that hierarchy for centuries in this state. And we need to own up to that. We need to foundationally rip that out of its root. When we talk about institutional racism, that’s what we’re talking about.

LIVE: Governor Newsom holds a press conference following meetings throughout the state with community, faith and youth leaders, small business owners and elected officials this week on racism, systemic injustice and how we move forward as a state. https://t.co/ivwCEwzcHn