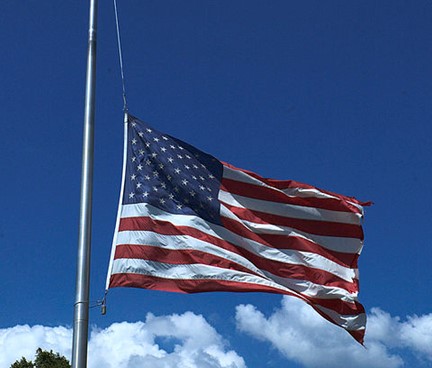 PALMDALE – The American flag will be flown at half-staff at all public buildings through sunset Sunday to honor the victims of the coronavirus pandemic, under a proclamation by President Donald Trump.

“Our nation mourns for every life lost to the coronavirus pandemic, and we share in the suffering of all those who endured pain and illness from the outbreak,” reads the proclamation issued by Trump Thursday.

“Through our grief, America stands steadfast and united against the invisible enemy. May God be with the victims of this pandemic and bring aid and comfort to their families and friends.”

House Speaker Nancy Pelosi and Senate Minority Leader Chuck Schumer sent a letter to Trump earlier Thursday requesting he “order flags to be flown at half staff on all public buildings in our country on the sad day of reckoning when we reach 100,000 deaths. It would serve as a national expression of grief so needed by everyone in our country.”

There have been 93,061 deaths in the U.S., according to figures released Thursday by the Centers for Disease Control and Prevention.

Speaking at a virtual fundraiser April 29, former Vice President Joe Biden, the Democratic Party’s presumptive presidential nominee said, “I’ve suggested the president should lower the flag to half-mast, honoring all those people — particularly those first responders, those doctors, those nurses — those folks who went in without the PPP, the protective equipment, and still did their job. And some of them lost their lives. They’re heroes. They should be honored as such.”