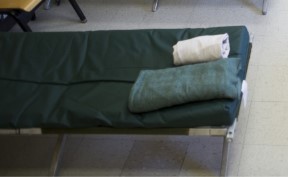 LANCASTER – The Los Angeles County Board of Supervisors unanimously voted Tuesday to extend the operation of its 100-bed homeless shelter in Lancaster through October. The Board also extended until October 31 the declaration of an Antelope Valley shelter crisis that was first declared in October 2017, the fifth such extension.

“Unsheltered individuals are particularly vulnerable and at high risk of injury and harm due to exposure to the extreme weather conditions in the Antelope Valley, in addition to the other health, safety and welfare-related circumstance and consequences of being homeless,” said Supervisor Kathryn Barger.

The Kensington Campus, located in Lancaster a few miles east of the County shelter, first opened its doors to residents in November. In addition, new “supportive housing” apartment complexes have been built in Lancaster and Palmdale to house homeless veterans and other individuals experiencing homelessness, and other similar complexes are planned.

However, a 2019 count found more than 2,000 homeless people remain without shelter in the Antelope Valley.

“Our partners across the county, cities and community-based organizations across the Antelope Valley are working together to develop sustainable housing solutions in the region knowing that the immediate need for short-term shelter is ongoing,” Barger said.

Open 24 hours a day, the shelter is funded through Measure H, the quarter-cent sales tax Los Angeles County voters passed in 2017 to expand services for homeless people. The shelter is located within County buildings at 60th Street West and Avenue I, adjoining the former Mira Loma Jail and the former High Desert Hospital. The shelter will be operated by Volunteers of America, which took over from the Salvation Army. The Salvation Army had operated the shelter since its creation in 2017.

Volunteers of America, based in Los Angeles, operates shelters elsewhere, including the winter shelter operated this year in a building on Ninth Street East south of Avenue Q in Palmdale. The Palmdale winter shelter will operate through April.