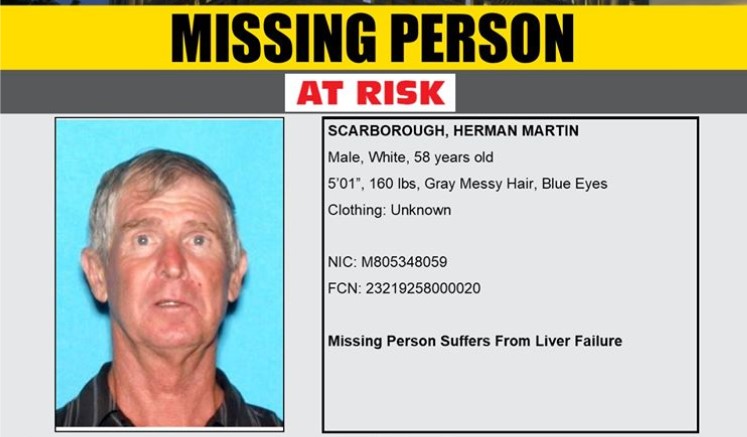 LANCASTER – A 58-year-old Lancaster man who was reported missing last year and then found dead in a dirt field was most likely hit by a vehicle, according to Lancaster detectives, who are now seeking information on the collision.

Herman Scarborough was last seen around 6 p.m. Aug. 1, 2019, on the 500 block of West Jackman Street in Lancaster. He was reported missing a month later on Sept. 10 by concerned family members, who said he suffered from liver failure.

On Oct. 1, 2019,  Scarborough’s body was found in a dirt field on the north side of the 3300 block of West Avenue I, according to the Los Angeles County Sheriff’s Department.

“Coroner investigators determined the cause of death was most likely a motor vehicle collision,” sheriff’s officials said Thursday in a news release.

Traffic investigators are seeking help from anyone who may have seen Scarborough walking along the roadway between Aug. 9 and Sept. 10, or anyone with information regarding the collision. Tipsters should contact the Lancaster Sheriff’s Station at 661-948-8466 or Crime Stoppers at 800-222-TIPS.

Authorities ID man whose body was found in Lancaster area