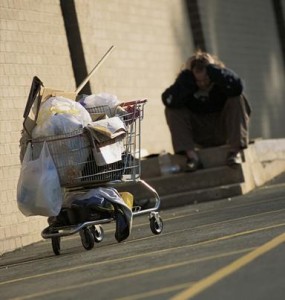 In the The AV Times Op-ed article “The Slippery Slope”, Gail Van Etten states “we all have more in common with the homeless of our community than we do with the millionaires.” This statement in false.

According to the Los Angeles Homeless Services Authority, in Area 1, which is limited to the Antelope Valley community within Los Angeles county, there are a total of 3,293 homeless people in this district. If the “we” in Van Etten’s statement refers to being non-homeless in the Antelope Valley, then she is incorrect in her statement that “we” have more in common with homeless individuals than we do with millionaires.

There are many daily struggles that homeless people face that are not on the radar of people in homes. The non-homeless community shares more in common with millionaires as both live in dwellings with running water, electricity, and many modern conveniences and luxuries. Common folk may not have the luxuries of designer clothes and expensive holiday vacations, but we share more in common with millionaires than we do with the homeless community. According to Abraham Maslow, we all have five levels of basic needs that must be met. The foundation of these needs begin with physiological needs; those are basic bodily needs for survival such as food, water, warmth, and air. With homeless individuals not having those basic needs met, it’s unfair to state that anyone relates more to them than they relate to those who live more extravagant lifestyles. If “we” are not lacking these physiological essentials, it’s unfair to state “we” have more in common with the homeless than we do with millionaires.

According to Zack Friedman of Forbes Financial, it’s estimated that 78% of workers live paycheck to paycheck. This statistic comes in below Van Etten’s stated fact that “eighty-five percent of the nation is exactly three to six months away from homelessness.”

Van Etten’s statement, “I know from first-hand experience. Go investigate for yourself” is biased and based just upon her personal experience. She does not know everyone nor can she speak on behalf of everyone. Van Etten fails to provide any supporting evidence to state that her personal experience is representative of everyone else’s, nor does she provide any research to back up her claim that government assistance programs are “a joke.”

Van Etten’s claims about government assistance programs are correct. In total, $820 is available to pay any outstanding bills, while $200 is reserved for food only. This is not enough to pay a mortgage or outstanding debt each month. With that being said, these programs were not designed to be used indefinitely. They are what they claim to be, temporary relief. Welfare reform is a topic not mentioned by Van Etten, or the amount of people currently claiming these benefits. The problem is not that government assistance programs offer too little; the problem is that there are not quality jobs available to those without higher education.

Those who are homeless and seeking housing may not qualify for traditional apartments or renting a room from a newspaper ad; however, there are many outreach programs designed to help re-integrate homeless individuals back into housing and to help assist with job placement. There are many outreach programs, often faith-based organizations, that provide transitional housing for those who are seeking a sober living environment. Individuals seeking such assistance can search on https://www.transitionalhousing.org/ for resources that are local to them.

Van Etten makes this blanket statement: “Most people in the Antelope Valley are not homeless due to drug addiction. Veterans, mental health, disability and job loss are the main reasons.” This is purely hypothetical.

Of the 3,293 homeless people in this district, 118 are veterans. That accounts for 3.1% of the total homeless population in the Antelope Valley. Also noted in this statistic is that 155 (6%) suffer from substance abuse. The primary factors among the 3,293 reported homeless individuals in the Antelope Valley are serious mental illness 591 (23%) and physical disabilities 386 (15%). While veterans are homeless, that’s not a cause of them being homeless.

About the author: Melinda Lopez is a Lancaster resident.

2 comments for "Op-Ed: Response to “Homelessness – The Slippery Slope”"