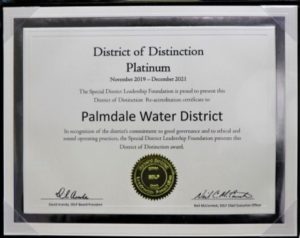 “It’s a real honor to receive the ‘District of Distinction- Platinum’ accreditation,” General Manager Dennis D. LaMoreaux said. “PWD Directors and staff have taken extra initiatives to meet the SDLF’s requirements to ensure the public that its water agency is transparent and has sound financial management practices.”

PWD is one of 36 special districts out of more than 2,000 to receive the District of Distinction recognition, and only 12 have achieved the Platinum status, according to California Special District Association’s Regional Public Affairs Representative Chris Palmer.

The accreditation is good through December 2021.

To receive this recognition, PWD’s Board of Directors and executive staff must show proof of educational training in public governance, as well as compliance with ethics and harassment prevention training. The District of Distinction accreditation is designed for districts to highlight their prudent fiscal practices along with other areas important to effectively operate and govern a special district.